‘We have nothing to hide’: Russia’s UN envoy calls for more critical thinking in Skripal case 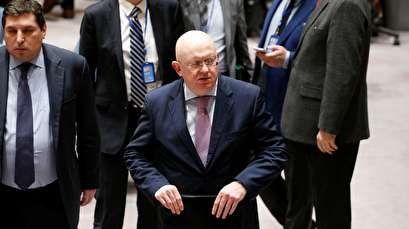 Nebenzya stated that, following the letter and the 24-hour ultimatum from British Prime Minister Theresa May, Russia had called for an open, not closed, meeting of the Security Council, in the interests of transparency. “We wanted to make sure everyone sees what’s happening here,” Nebenzya said.

He went on to decry the “completely irresponsible statements” and “threats against a permanent member of the UNSC” made by British politicians calling the international community to look beyond “highly likely” type of proof, while reaffirming that Russia “had nothing to do with this incident.”

WHY UN, NOT HAGUE?

Nebenzya questioned why the case was being “dragged” before the Council, ignoring procedure. He alleged that the real reason the British government broke protocol was that it feared that “real experts” in The Hague would not be convinced by the evidence.

“We asked for samples of the substance used to assist in a joint investigation. This request was ignored,” he said. The Organization for the Prohibition of Chemical Weapons is located in The Hague.

“Is this something that benefits Russia on the eve of Russian elections and the World Cup? Abiding on presumption of innocence, I can think of a great number of countries that would benefit from such accusations,” Nebenzya said, declining to name them on the UNSC floor, however. He described Skripal as “pardoned” and “no longer a threat to Russia,” while simultaneously being “the perfect victim who could justify any unthinkable lie, any kind of untruth tarnishing Russia.”

“Let me repeat. Russia had nothing to do with this incident. The British ultimatum isn't worthy of our attention and is null and void,” he said. “We trust they will provide samples of the substances for examination for a joint investigation. This is not optional, this is a mandatory requirement. We have nothing to fear and nothing to hide.”

TUBES INSTEAD OF WORDS

Nebenzya called on his colleagues in the Security Council to invoke the spirit of Arthur Conan Doyle’s famous detective, Sherlock Holmes, and think critically about the incident and about the evidence and subsequent allegations.

“We demand material proof of the alleged Russian nerve agent traces from this event,” he said. “Merely stating that there is incontrovertible proof is unacceptable. An independent analysis would be more appropriate.”

He alluded to the fact that such rapid analysis and verification by British authorities might itself prove damning to their claims.

“For the British specialists to be perfectly confident that this was a Novichok agent and not any other kind, they would need a control standard for proof. It [the substance used in the attack] must be compared to a control substance,” Nebenzya stated. “They have a collection and they have the formula. In other words, if the UK is so firmly convinced this is Novichok, they have samples and formula and are capable of formulating it themselves.”

“It is no longer necessary to show the Council test tubes with white substances. It is enough to send letters with egregious accusations,” he said.

WHAT ABOUT OTHER COUNTRIES?

Nebenzya highlighted that multiple NATO-member countries had previously initiated programs to develop VX-type nerve agents themselves and that developmental work on Soviet-era nerve agents stopped in 1992. In 2017, the Russian Federation completed the destruction of all existing stockpiles in accordance with OPCW guidelines. To date, the US has not destroyed its chemical stockpile.