TEHRAN, March 15 - Turkish Foreign Minister Mevlut Cavusoglu's planned visit to Washington on 19 March has been postponed due to the firing of US Secretary of State Rex Tillerson, Reuters reported. 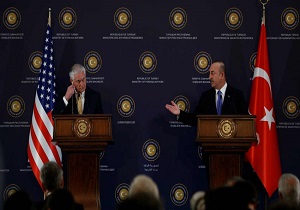 TEHRAN, Young Journalists Club (YJC) - Turkish Foreign Minister Mevlut Cavusoglu's planned visit to Washington on 19 March has been postponed due to the firing of US Secretary of State Rex Tillerson, Reuters reported.

A Turkish spokesman made the announcement on Wednesday, but did not provide further details for the trip's cancellation.

Cavusoglu said he hoped to build good relations with the incoming Secretary of State Mike Pompeo.

US-Turkish relations have worsened over Washington's support for the Kurdish People's Protection Units (YPG), which Ankara considers a terrorist group but is a core US partner in the fight against the Islamic State.

Ankara views the YPG as the Syrian arm of the Kurdistan Workers' Party, a group it has been in armed conflict with for over three decades. Both the US and the EU consider the PKK a terror group.

Relations between Turkey and Washington eased after a recent visit by the now-former US Secretary of State Rex Tillerson. In it, the US and Turkey agreed to a joint administration of Manbij, an area where US forces are stationed.

Turkey's Operation Olive Branch in nearby Afrin, launched on 20 January, raised concerns that the two NATO members could come into direct conflict.

Turkish media has also seized on a July 2016 Mike Pompeo tweet - the incoming new Secretary of State - referring to Turkey as a "totalitarian Islamist dictatorship". The tweet has been deleted.

Turkey is also angered by the US' failure to extradite Fethulla Gulen, religious cleric and leader of the Gulen movement.

Ankara views Gulen and behind the failed July 2016 coup attempt in Turkey.

Share to
Related News
U.S. set up base in Syria's Manbij after Turkish threats: local official
Turkish embassy in Denmark attacked with petrol bombs, no injuries: police
US plans to remain in Syria ‘for a long time, if not forever’ – Lavrov
‘US won’t even sell us rifles’: Turkey’s FM explains purchase of Russian S-400 air-defense systems
Turkish police use tear gas against anti-US protest during Tillerson's visit
Turkey, US to work together in Syria occupation: Cavusoglu, Tillerson
Breaking point? Turkey demands ‘concrete steps’ from US while Washington wavers
Ankara-Washington ties at very critical point, Turkish FM says
Erdogan aide meets US National Security Adviser in Turkey amid tensions
US troops must leave Syria’s Manbij – Turkey’s Foreign Minister
US calls on Turkey to exercise restraint in Syria offensive
Turkey says its 'mistrust' of Washington over Syria continues
Tags
turkey ، us ، mevlut cavusoglu
Your Comment