TEHRAN, March 18 -China’s largely rubber-stamp parliament on Sunday appointed a senior graft-buster as head of the country’s controversial new anti-corruption body, though real power will remain as always with the ruling Communist Party. 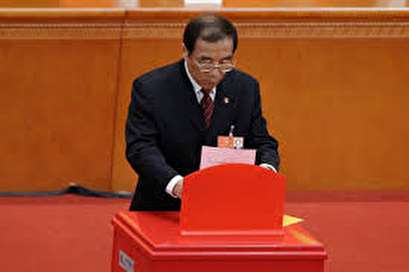 Supervision Minister Yang Xiaodu, who is also a deputy head of the party’s own graft-fighting Central Commission for Discipline Inspection (CCDI), was elected head of the National Supervision Commission, which will have a wide remit.

All state and public-sector employees, as well as managers working for a state-backed schools, hospitals, institutes or companies, can be targeted by the new commission, regardless of whether they are a party member or not, according to the latest draft of the pending supervision law.

Zhao Leji, a member of the party’s elite seven-man Standing Committee, remains head of the CCDI. That body will remain and will share many of its functions with the new commission.

Speaking to reporters earlier this month as parliament opened, Yang said the new anti-corruption body was needed to ensure holes in supervision were covered.

“We don’t think the supervisory commission is an organ with super powers,” he said.

“Most of our work is a reminder to public officers. But no one should doubt our commitment to punishing corrupt officials who are obstinate to go their own way,” Yang added.

“In the past, there were holes in our anti-graft system – that is the supervision of public officers who are not members of the Communist Party of China, and who are not civil servants.”

On Tuesday, parliament will formally pass the law that will give the new commission its legal framework, the state constitution having already been amended last weekend to accommodate the new body.

Some legal scholars have criticized provisions for the new body for failing to protect the rights of suspects during investigations.

Rights groups say the new supervision law will give detentions the veneer of legality, while still risking torture and rights abuses that they say plagued the old system.

A senior official said last week China will revise its criminal law to make way for the new anti-graft commission.

The current supervision law draft fails, for example, to ensure suspects have access to a lawyer during investigations.

The inclusion of such provisions to criminal law in 2012 was seen as making modest progress to combat long-standing issues such as miscarriages of justice and forced confessions.

Xi’s anti-graft campaign has made use of a secretive and controversial system of residential detention, which is outside the scope of China’s criminal procedure law.

Xi has pledged to reform the detention system as part of the establishment of the new supervision commission.

Among other votes announced by parliament on Sunday were the widely expected re-elections of Li Keqiang as premier - who only had two “no” votes cast against him - and Zhou Qiang as chief justice.

Minister of Justice Zhang Jun was elected head of the state prosecutor.