TEHRAN, March 19 - Leaders of Asian and Latin American states have extended congratulations to Vladimir Putin over his landslide re-election as Russian president, while Western leaders are still tight-lipped amid thorny Moscow-West relations. 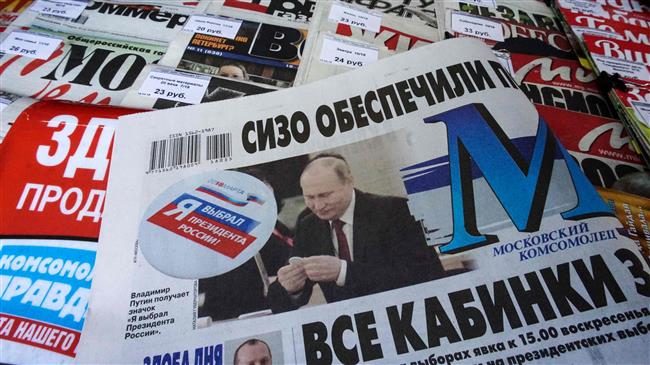 TEHRAN,Young Journalists Club (YJC) - In his best election performance ever, Putin secured nearly 77 percent of the ballots cast in Sunday’s presidential election, according to the official results released earlier today.

Iranian President Hassan Rouhani was among the first leaders to felicitate his Russian counterpart on his “decisive victory” on Monday.

In his congratulatory message to Putin, President Rouhani expressed hope for stronger Tehran-Moscow ties at bilateral, regional and international levels.

Chinese President Xi Jinping also offered felicitations to the Russian head of state, saying Beijing’s partnership with Moscow was at its “best level in history.”

“Currently, the China-Russia comprehensive strategic cooperative partnership is at the best level in history, which sets an example for building a new type of international relations,” Xi said.

“This new victory of President Putin solidifies his leadership and his demonstrated capacity to steer the specific weight of Russia in history and in the convulsing world of today,” Maduro said.

“Russia respects the dignity of societies and guarantees geopolitical equilibrium against the charge of imperialism.”

The leaders of Kazakhstan, Cuba and Belarus have also sent messages to Putin.

This is while Western leaders have yet to react to Putin’s reelection amid troubled Moscow-West relations over a range of issues, including the crisis in Ukraine, Russia’s anti-terror mission in Syria, and most recently the poisoning of a former spy and his daughter in Britain.

Germany became the first Western country to break the silence on Putin’s reelection, with its foreign minister saying Monday that Russia will remain a “difficult partner” after the elections, but will be needed to help resolve international tensions.

“The result of the election in Russia did not surprise us any more than the circumstances of this election,” Maas told reporters in Brussels. “We certainly cannot talk in all respects about a fair political contest as we know it.”

German Chancellor Angela Merkel, according to her spokesman, will congratulate Putin in a message that will also raise “challenges” in their relations.

“I cannot preempt the content of the congratulatory message, but I believe that the message will also mention the challenges in Germany and Russia's relations,” Steffen Seibert said.