TEHRAN, April 12 -Indonesia’s ultra-conservative Aceh province will no longer hold canings in public places or allow such punishment to be recorded, the government chief said on Thursday. 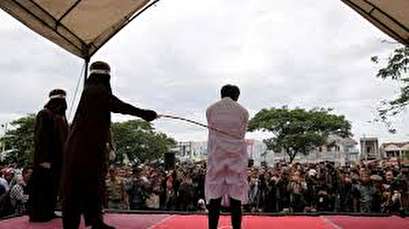 TEHRAN, Young Journalists Club (YJC) -Indonesia’s ultra-conservative Aceh province will no longer hold canings in public places or allow such punishment to be recorded, the government chief said on Thursday.

Aceh is the only province in majority-Muslim Indonesia that follows Islamic law and imposes public caning for crimes like theft, gambling and adultery. In 2014, the province outlawed homosexuality.

The move to restrict access comes nearly a year after two men convicted of having gay sex were publicly flogged and images of their punishment were livestreamed and uploaded on the Internet, drawing international criticism.

“The prisoner is punished once, but if it’s recorded on video and that’s uploaded to YouTube, he is punished for life with those images,” Aceh governor Irwandi Yusuf, who will issue a decree to change the rules, told reporters.

He added that children will no longer be allowed to witness corporal punishment.

“Imagine if children witness a punishment and there is applause... Is that what Islamic law means?” he added.

Public canings were introduced in Aceh in 2005 and are supported by many Acehnese. Some members of the provincial legislative council disagreed with the governor’s decree, which does not require council approval.

“Something like this should be done in consultation with the council, otherwise it is unconstitutional,” said council speaker Muharuddin.