TEHRAN, April 14 -The Iranian and German foreign ministers have stressed that Tehran's missile program is not related to the country's nuclear deal with the world powers. 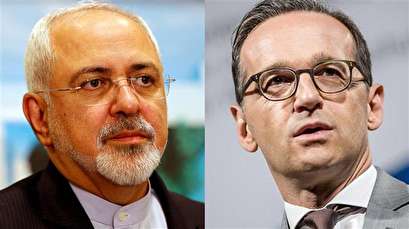 TEHRAN, Young Journalists Club (YJC) -The Iranian and German foreign ministers have stressed that Tehran's missile program is not related to the country's nuclear deal with the world powers.

Iran's Foreign Minister Mohammad Javad Zarif and his German counterpart Heiko Maas made the remarks during a telephone conversation on Friday, IRNA reported.

Zarif called on the European Union to pressure the US to fully honor its commitments under the nuclear deal, known as the Joint Comprehensive Plan of Action (JCPOA), in an attempt to ensure that the accord is fully implemented.

Iran and the five permanent members of the United Nations Security Council – the US, France, Britain, Russia and China – plus Germany signed the nuclear agreement on July 14, 2015 and started implementing it on January 16, 2016.

US President Donald Trump has threatened to walk away from the nuclear deal and reimpose sanctions by May 12 unless tough new restrictions are imposed on Iran's nuclear and missile programs.

Trump wants Iran's missile capabilities to come under the provisions of the nuclear agreement, which Tehran vehemently rejects.

The US president has called on America's European allies to agree to tougher measures and new conditions for Washington to remain in the deal.

In March, German Chancellor Angela Merkel warned against serious repercussions of a US decision to pull out of the multilateral agreement, saying such a move would plunge the Middle East into war.