TEHRAN, April 23 -The Israeli military has targeted a Syrian army artillery position in the Golan Heights after claims that a mortar shell exploded close to the occupied territory. 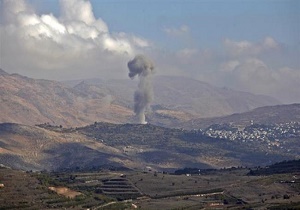 TEHRAN, Young Journalists Club (YJC) - Israeli forces claimed on Monday that the mortar had apparently been fired during fighting between Syrian government forces and militant groups, and finally landed near the border fence in the northern part of the region.

"A mortar shell fell adjacent to the security fence in the northern Golan Heights," the Israeli army said in a statement.

In response, Israeli forces “targeted one artillery piece in the area from which the fire originated, in the northern Syrian Golan Heights.”

Israel seized the Golan Heights from Syria after the 1967 Six-Day War and later occupied it in a move that has never been recognized by the international community. The regime has built dozens of settlements in the area ever since and has used the region to carry out a number of military operations against the Syrian government.

During the past few years, Israel has frequently attacked Syrian military targets in the Golan Heights in what is considered an attempt to prop up terrorist groups that have been suffering heavy defeats against Syrian government forces.

Back in April 2015, Israeli Prime Minister Benjamin Netanyahu officially admitted for the first time that the regime's military had conducted strikes in the Syrian territory.

Damascus says Israel and its Western and regional allies are aiding Takfiri terrorist groups operating inside the Arab country, while the Tel Aviv regime's military carries out such sporadic strikes against Syrian government forces. The Israeli regime has even set up field hospitals to treat wounded militants evacuated from Syria.

Moreover, the Syrian army has repeatedly seized huge quantities of Israeli-made weapons and advanced military equipment from the foreign-backed militants inside Syria.