TEHRAN, May 10 - US Republican Senator John McCain has advised his colleagues in the Senate against confirming Gina Haspel, President Donald Trump’s nominee for CIA director who is accused of involvement in the agency’s torture program. 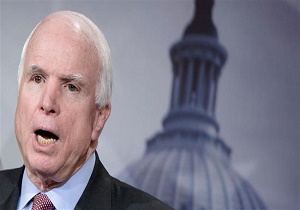 TEHRAN, Young Journalists Club (YJC) – McCain, one of the loudest Republican critics of Trump’s policies, said after Haspel’s much-anticipated confirmation hearing on Wednesday that "her refusal to acknowledge torture’s immorality is disqualifying."

The Arizona senator said Haspel failed to address his concerns about her role in the CIA’s so-called “enhanced interrogation program” when former President George W. Bush was in office.

Haspel cannot afford to lose any additional Republican support. McCain is recovering from surgery related to his brain cancer in Arizona and was not expected to be present when the Senate votes on Haspel's nomination. With McCain out and Sen. Rand Paul (R-Ky.) opposed, Haspel still needs support from at least one Democratic senator as well as every other Republican to be confirmed.

In her testimony, Haspel defended the use of torture under her watch, saying the decision was necessary in the aftermath of the September 11, 2001 attacks.

However, she said she would never bring back such programs even if directly ordered by Trump. During the campiagn, Trump said he would authorize waterboarding and other sorts of torture if necessary.

“Ms. Haspel’s role in overseeing the use of torture by Americans is disturbing. Her refusal to acknowledge torture’s immorality is disqualifying,” McCain said. “I believe the Senate should exercise its duty of advice and consent and reject this nomination."

Democratic Senator Joe Manchin said Wednesday that he would support Haspel's nomination but the veteran spy needs more than that to win the position.

Haspel is also accused of assisting Jose Rodriguez, a CIA agent who ordered the destruction of a cache of videotapes that had documented the torture of two detainees.

Despite confessions by Rodriguez that he had informed Haspel of his decision, the CIA nominee told lawmakers on Wednesday that she did not know higher officials were not aware of what Rodriguez was going to do.

Diplomatic Source: France, Britain, and Germany have not received invitation to meet Iran

FM Spox.: Meeting of Afghan Neighbors to Show the Opposition to Foreign Interference

US President Biden to discuss Iran during G20, COP26