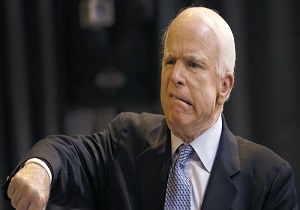 White House Press Secretary Sarah Huckabee Sanders grilled her staff during a meeting on May 11 for a derogatory comment concerning Senator John McCain's condition, reports ABC News, citing multiple anonymous senior sources in the White House. According to the sources, Sanders was much more upset with the fact that information from a closed meeting had surfaced in media than by the comment itself.

One of the sources noted that Sanders was very "emotional" and on the verge of tears. Kelly Sadler, the staffer who made the controversial comment, reportedly did not apologize for it during the meeting.

Sadler, the communications aide, made her notorious comment during a closed meeting. While discussing Senator McCain's unwillingness to accept Gina Haspel's appointment as the CIA chief, she noted that "it doesn't matter, he's dying anyway."

The comment later surfaced in media, prompting a severe public backlash, with many officials from both the Democratic and Republican parties demanding that Sadler be fired, which hasn't happened. The senator's wife reminded Sadler that he has a family, whose feelings can be hurt, while his daughter, Meghan McCain, noted that life "is not how you die, it's how you live." Sadler later called Meghan McCain to apologize. Senator John McCain is currently battling brain cancer.