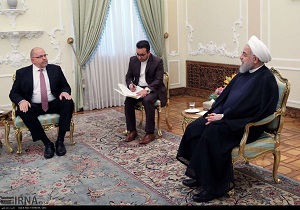 TEHRAN, Young Journalists Club (YJC) - In the ceremony, President Rouhani said that private sectors of the two countries should try to use maximum existing capacities and capabilities of the two states.

Receiving credentials of the new Latvian envoy, President Rouhani reminded bilateral friendly relations between the two countries, and expressed the hope that by efforts of both countries 'officials, the economic, cultural and scientific ties between Iran and Latvia would be developed.

He added that Iran was among first countries to recognize Latvia independence, and expressed that Iran is ready to expand its cooperation in different sectors with Latvia.

Rouhani said in recent years positive developments took place in Tehran-Riga relations, and underlined on the necessity of efforts of private sectors, especially chambers of commerce of the two countries, in direction of maximum use of the existing capacities and capabilities to bolster mutual cooperation.

Peteris Karlis Elferts submitted his credentials, and said being in Iran is a great honor for him.

He pointed to brotherly ties between the two countries, and said that Latvia has always felt indebted to Iran's principle supports.

The new Latvian accredited ambassador to Iran underlined the necessity to use existing capacities and called for development of all-out ties with Iran in different sectors.