Judge orders US to provide list of separated migrant children

TEHRAN, July 07 -A federal judge has ordered the US government to provide a list of the estimated 100 immigrant children under the age of 5, who were separated from their families, by Saturday evening. 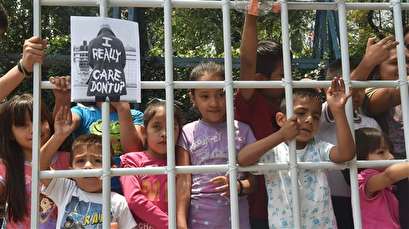 TEHRAN, Young Journalists Club (YJC) -A federal judge has ordered the US government to provide a list of the estimated 100 immigrant children under the age of 5, who were separated from their families, by Saturday evening.

"What I'm contemplating is the government provides a list to plaintiffs counsel by tomorrow 5 p.m. (PDT, midnight GMT) with the identities of the children," US Judge Dana Sabraw said on Friday at a hearing.

Sabraw also asked the government to explain by Saturday its expectation for reuniting each of those children with their parents by the end of Tuesday.

Last month, he issued the reunification order, which also set a July 26 deadline for over 2,000 children to be reunited.

The US government attorneys, however, said they may fail to meet those deadlines because of delays in confirming family relationships.

Sabraw refused to extend the deadlines without more information.

He also ordered the government to inform the American Civil Liberties Union, which brought the class action case, of the expectations for meeting the deadline for each of the children on the list.

In addition, Sabraw scheduled a status conference for Monday at 10 a.m. PDT, saying he hopes the government and ACLU can reach an agreement about any need to extend the reunification deadline.

An ACLU attorney, Lee Gelernt, said organizations would take the opportunity to help connect the parents with the children.

"We have been deluged by thousands of doctors, lawyers and people who want to help," Gelernt said. "The outpouring is incredible. Every one is feeling we should not make these children pawns."

Gelernt criticized the government for giving parents a form that suggests they can get their child back only if they give up their asylum claim.

"We believe there is some coercion going on, whether intended or not," he told Sabraw at the hearing.

The Trump administration's "zero tolerance" policy towards illegal immigration has led to family separations at the US border with Mexico.

Broadcast pictures of young children held in enclosures behind chain-link fences have triggered angry protests across the US and elsewhere so far.

More than 2,000 separated children are currently in the US government's custody, according to the Department of Homeland Security, which claims that it is aware of their locations and is making an effort to reunite them with their families.