England’s Kent may turn into a giant lorry park after Brexit: Report

TEHRAN, July 31 - A report has revealed that British authorities are planning to turn key corridors in the province of Kent, including a major highway leading to the Channel, to a giant lorry park in case United Kingdom fails to reach a deal with the European Union on how it should leave the bloc next year. 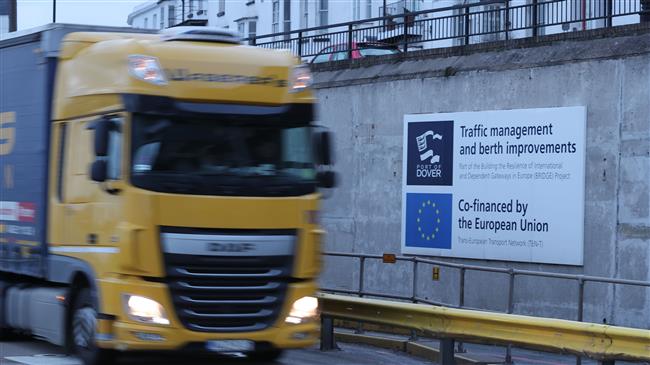 TEHRAN, Young Journalists Club (YJC) - The report published on the website of the Independent newspaper on Tuesday suggested that authorities in the department for transport (DfT) were deliberately hiding their plans for converting four lanes of a 13-mile stretch of the M20 motorway to allow lorries to park up if they are delayed on the Channel as a result of a no-deal Brexit.

The report cited officials in the Kent County Council as saying that the new plan, dubbed Operation Brock, which stands for “Brexit Operations Across Kent”, was totally a fresh scheme and had nothing to do with previous cross-Channel transport operations run by the DfT.

Earlier reports had suggested that a very short delay in customs clearance at the Port of Dover could result in immediate tailbacks of 20 miles for the lorries.

Opposition lawmakers reacted to the report and accused the government of Prime Minister Theresa May of trying to hide the impacts of their policy about Brexit.

“Food will rot on the motorway and jobs are at risk as manufacturing supply chains are muddled and slowed by Brexit,” said Virendra Sharma, a Labour MP, adding, “The government is trying to hide the devastating impact of their Brexit policy.

There is an increasing uncertainty about how Britain would leave the EU in March and whether it would come out with a binding agreement or negotiations would fail, leaving Britain with a no-deal Brexit.

Brussels chief negotiator Michel Barnier has rejected key proposals of a final plan submitted by May earlier this month, saying, for instance, that a dual system of taxes enforced on either side of the border between EU member Ireland and the UK province of Northern Ireland will simply not work.