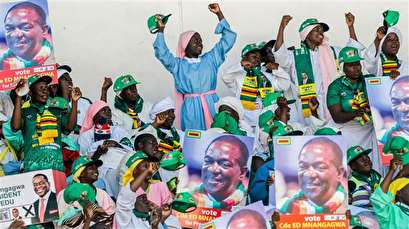 The Zimbabwe Electoral Commission (ZEC) said on Wednesday that ZANU-PF had picked up 110 seats against the 41 for the opposition Movement for Democratic Change (MDC). Another 58 seats are yet to be declared.

The final results of the presidential poll are expected by Saturday.

ZANU-PF, which ousted former president Robert Mugabe after 37 years last November, would need an additional 30 seats to have a two-thirds majority, which would allow it to change the constitution at will.

Opposition candidate Nelson Chamisa, who leads the MDC, has accused the electoral commission of delaying presidential results to favor the ruling party, led by his rival, President Emmerson Dambudz Mnangagwa.

He accused the commission of releasing the parliamentary results first to prepare people for a Mnangagwa victory.

“The strategy is meant to prepare Zimbabwe mentally to accept fake presidential results. We’ve more votes than ED (Emmerson Dambudzo),” he said in a Twitter message. “We won the popular vote (and) will defend it.”

His supporters took to the streets on Tuesday, protesting the delay in the results. Crowds also gathered outside the MDC Alliance headquarters in the capital, Harare, celebrating what they believed to be Chamisa’s victory.

The gathering was followed by the deployment of a truckload of policemen and water cannon to the area.

Allegations of fraud risk plunging the country into violence.

Millions of people voted peacefully in the Monday election, the first-ever vote without Mugabe in almost 40 years in Zimbabwe.

His 37-year old ruling came to an end last November after Zimbabwe’s military took over the capital and the state broadcaster and held Mugabe and his wife under house arrest in a bloodless coup d’état.