TEHRAN, August 1-The United Nations Children’s Fund and Food Program have voiced grave concern about the humanitarian crisis unfolding in Yemen, especially in its lifeline port city of al-Hudaydah. 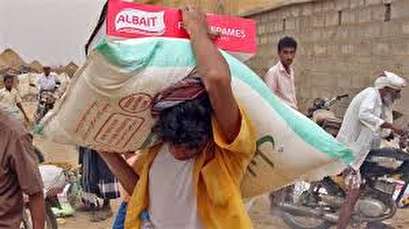 On Wednesday, the UNICEF’s Executive Director Henrietta H. called for an immediate halt to attacks on water facilities and civilian infrastructure in the war-battered country.

Such attacks, she said in a statement, were “unacceptable, inhumane, and in breach of the basic laws of war.”

“Ongoing violence and repeated attacks on lifesaving civilian infrastructure in al-Hudaydah are a direct threat to the survival of hundreds of thousands of children and their families,” she added.

“Yet the past few days have seen an escalation in the targeting of systems and facilities that are essential to sustaining the lives of children and families,” the statement read.

She cited two recent airstrikes respectively targeting a UNICEF-supported sanitation center in al-Hudaydah’s Zabid District, and another against the water station in al-Mina District, which provides the port city with most of its drinking water.

The official said the destruction of the facilities could directly contribute to the outbreak of cholera and acute diarrhea.

“The war in Yemen has no winners. It is robbing Yemeni children of their futures,” she added.

Yemen has been under Saudi-led attacks since March 2015. The invasion, which seeks to bring back Yemen’s former Saudi-allied officials, has killed thousands of civilians.

The invaders have now turned their focus on al-Hudaydah, which receives the bulk of vital imports into Yemen.

Days earlier, international NGO Save the Children likewise warned that fresh Saudi attacks could create the ideal conditions for a new catastrophic cholera outbreak affecting thousands of people in Hudaydah.

The WFP's country director Stephen Anderson visited a family of 11, which has been displaced by the fighting in the city and asserted that the Yemeni people desperately needed peace in order to rebuild their livelihoods.