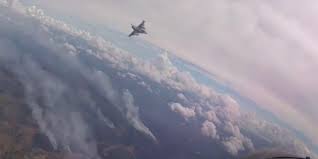 TEHRAN, Young Journalists Club (YJC) -The head of the Air Forces' Production Team, Anders Persson who is leading the tests said conventional method of sending firefighters into an area like Alvdalen was too risky because the fires were burning near undetonated ammunition.

Persson added that his team would use the opportunity to test bomb-dropping as a new method to fight wildfires and if successful it could be considered at a national level.

So far, 80 bombs have been dropped in the test, Swedish MOD reported.

Many parts of Sweden have seen their driest weather in the May to mid-July period since records began in the 19th century, the Swedish Meteorological and Hydrological Institute (SMHI) said, and there are few signs of the drought coming to an end.