TEHRAN, August 1- Turkish President Recep Tayyip Erdogan says his country will never give in to threats of sanction by the United States over the trial of an American pastor, accusing the NATO ally of displaying a "Zionist mentality." 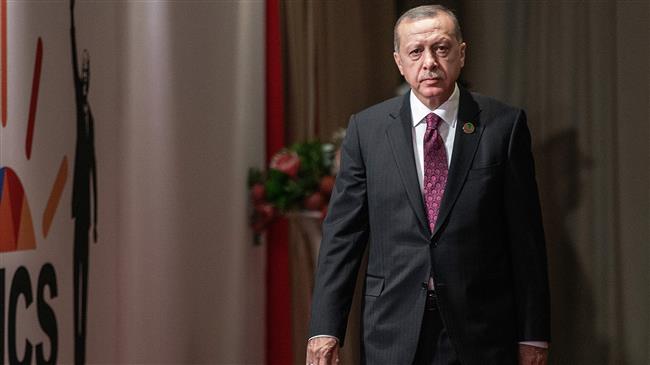 TEHRAN, Young Journalists Club (YJC) - Relations between Washington and Ankara have spiraled into a full-blown crisis over the trial of Andrew Brunson, a Christian pastor who is accused of helping the perpetrators of a failed military coup against Erdogan in 2016.

US President Donald Trump threatened last week to impose "large sanctions" on Turkey unless it frees the pastor, was transferred to house arrest last week after spending 21 months in a Turkish prison on terrorism charges.

"These threatening remarks against us will not benefit anyone. We showed the best solidarity with the United States in NATO. We have acted together with them in Korea. Together, we put up many fights. Such a threat against Turkey, a country that still fights together with the United States side by side and shows top-notch solidarity in NATO, is not fitting for them. And excuse us but we do not give credit for using such threatening language," Erdogan told reporters in the Turkish capital of Ankara on Wednesday.

"However, we will never accept this understanding and the usage of such threatening language in the United States by the evangelist, Zionist mentality," he added.

Erdogan’s Spokesman Ibrahim Kalin said Tuesday that Ankara would retaliate against any US sanctions over the trial of the Christian pastor.

The Turkish president also said his foreign minister, Mevlut Cavusoglu, was going to discuss the matter with US Secretary of State Michael Pompeo on the sidelines of an upcoming ASEAN summit that will be held in Singapore in the coming weeks.

The remarks came a day after a Turkish court rejected an appeal by Brunson's lawyers to end the house arrest during his trial.

Brunson’s lawyer, Ismail Cem Halavurt, who had filed the appeal, said he had not been notified of a court ruling about his 52-year-old client. Brunson’s next hearing as part of the trial is scheduled for October 12.

The American pastor, who has lived in Turkey for more than two decades, has been required by court to wear an electronic bracelet at all times and prevented him from traveling outside of the country.

Brunson has denied all charges of having links with the Kurdistan Workers’ Party (PKK) militant group and movement of the US-based opposition cleric Fethullah Gulen, whom Ankara accuses of having masterminded the coup attempt.

The US has constantly denied calls by Ankara to extradite Gulen.