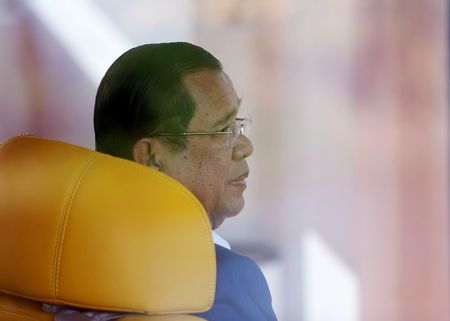 TEHRAN, Young Journalists Club (YJC) - Hun Sen, 65, whose Cambodian People's Party (CPP) said it had won all 125 parliamentary seats in Sunday's vote, said the boycott was a "stupid act" and a "miscalculation".

The CPP has pointed to what it says was a solid election turnout as proof of the country's sound democratic process. More than 82 percent of those registered to vote cast their ballots.

"The campaign failed, more than 82 percent of people across the country voted, showing that our people support their own democratic process," Hun Sen told thousands of factory workers in the capital Phnom Penh.

The CNRP was dissolved by the Supreme Court last year and 118 members were banned from politics for five years as part of a sweeping crackdown in the lead-up to the election.

Hun Sen, a former Khmer Rouge commander who has ruled for nearly 33 years, is expected to visit Europe in October. The trip includes meetings with officials of the European Union, which heavily criticized the election process, in Brussels.

A European Parliament subcommittee this week called for measures against Cambodia related to its access to EU trade preferences under its "Everything But Arms" scheme.

That scheme, giving tariff-free access, and similar trade preferences in the United States have helped Cambodia build a garment industry on low-cost labor.

Hun Sen challenged critics to protest during the visit.

"I let you know in advance, so people in Europe can organize demonstrations against me," Hun Sen said.

CNRP leader Kem Sokha was jailed on treason charges in September as part of Hun Sen's pre-election crackdown and remains in pre-trial detention near the border with Vietnam.

The CNRP hit back at Hun Sen on Thursday.

"The challenge the CPP has today is the one-party state which entirely discredits article 1 of the constitution which stipulates that Cambodia shall be a multi-party democracy," CNRP vice president Mu Sochua told Reuters.