Russian FM: Need for 'final blow' to terrorists in Idlib

TEHRAN, August 2 - Russian Foreign Minister Sergei Lavrov says only the Syrian people are entitled to determine the fate of their country, not external players, whose meddling in the war-torn state's affairs is "counterproductive." 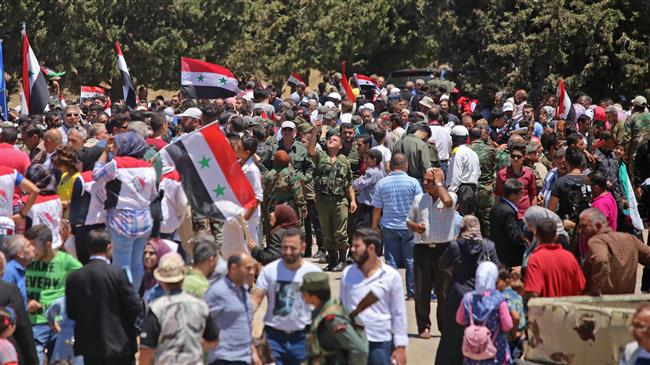 TEHRAN, Young Journalists Club (YJC) - Speaking on the sidelines of the 51st Association of Southeast Asian Nations (ASEAN) ministerial meeting in Singapore on Thursday, Lavrov said that based on the UN Security Council Resolution 2254 only the Syrians should decide the future of their homeland and that Syria's unity and independence should be preserved.

"There are some external players who would prefer to decide everything for the Syrians but it is the Syrian people who should rule the country, determine its form of government and write a constitution. We do not support such attempts as we consider them to be counterproductive," he said.

Lavrov further stressed that Russia, as a member of the Astana peace process, had put forward an initiative for the establishment of a Syrian constitutional committee.

"It is not easy work but we will continue to help compile a member list that the government and other members of the constitutional committee will accept," he said.

Lavrov also noted that the counter-terrorism fight in Syria is not over yet, and that it is necessary to eliminate militants in the country's northwestern Idlib Province.

"The work [in Syria] is in full swing, a lot is yet to be done. At the same time, it is necessary to deal a final blow to terrorists near Idlib, which still remain there," the minister said.

Separately on Thursday, Russia said Syrian troops had managed to wrest control over three southern provinces and the border zone with Jordan.

He also praised the "unique operation" that led to the liberation of "3,332 square kilometers" of Syrian territory from the grip of Takfiri terrorists.

The Syrian government, he said, "entirely retook control of the border between Syria and Jordan."

In recent weeks, the Syrian army has been making significant territorial gains against terrorists in the country's south. Militants have been handing over their heavy weapons to Syrian government forces and leaving the region in negotiated surrender deals.

Assad said on Wednesday that the final victory over terrorism is close thanks to the sacrifices of the Syrian army forces.