TEHRAN, August 4 - Windy weather has hindered the fire extinguishing work at the Attica Peninsula in Greece, where a wildfire has ravaged hundreds of buildings and claimed the lives of at least 91 people. 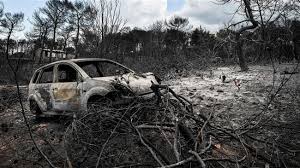 TEHRAN, Young Journalists Club (YJC) - The town of Kineta in the western Attica Peninsula is the most-afflicted area, where more than 300 buildings were burned and more than 500 damaged, yet luckily no casualty has been reported so far thanks to timely evacuations. But the town of Mati in eastern Attica suffered a much huger loss, with the fire burning more than 1,200 houses and claiming the lives of at least 91 people.

Rescue work has been underway since the fire broke out in late July, but the progress seems to have been impeded by the extreme weather.

"We find that the wind is particularly strong and always changes directions. We have never encountered such situation before. Such a strong wind makes the fire difficult to be controlled, as ordinary planes cannot take off to put out the fire. Helicopters are all we can count on, yet they are not enough," said Grigorios Stamoulis, mayor of Megara City in the region.

Experts are pondering over the relationship between the fire and the extreme weather since Greece has seen an abnormal summer, with frequent wind and rain beginning from May this year.

"Over the past whole year, the weather has been changing very extraordinarily in a frequent manner. This situation could be even more severe than we have observed. We all need to know that," said Stamoulis.