Rare Quran copies back in Iran from Germany, gifted to Astan Quds Razavi

TEHRAN, August 5 - Two rare copies of the Holy Quran that have been returned to Iran from Germany were gifted to the museum of Astan Quds Razavi. 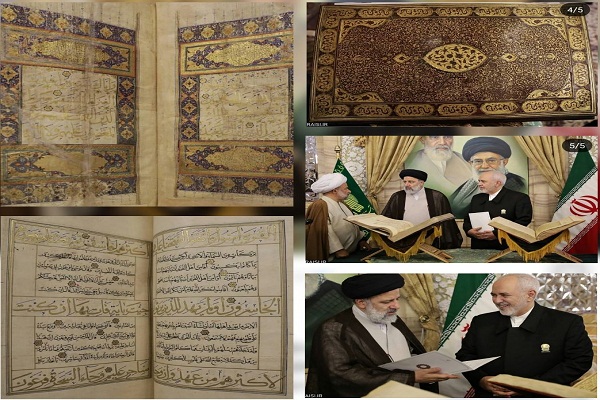 TEHRAN, Young Journalists Club (YJC) - Iran’s Foreign Minister Mohammad Javad Zarif handed the Qurans to the museum during a meeting with Hojat-ol-Islam Seyed Ebrahim Raisi, the custodian of the Astan.

The rare copies date back to the 8th and 11th Hijri centuries (14th and 17th centuries AD), according to Tasnim.

It is the administrative organization that manages the Imam Reza (AS) shrine and various institutions belonging to the organization.

The museum of the Astan Quds Razavi is a major museum complex adjacent to the holy shrine of Imam Reza (AS).