TEHRAN, August 5 - Brazil’s Workers Party (PT) has officially nominated its founder, former president Luiz Inacio Lula da Silva, for the upcoming presidential election, in a largely symbolic move since he remains in prison on a 12-year sentence on corruption charges. 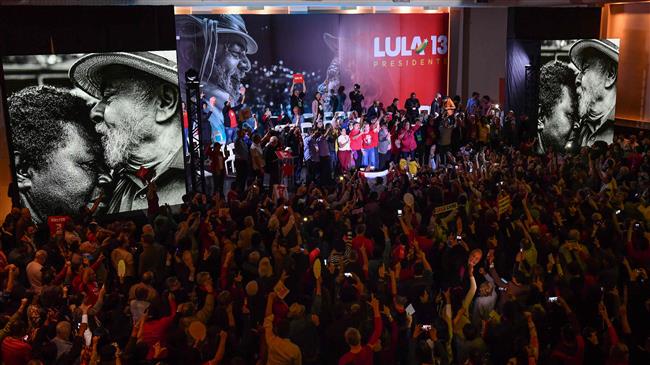 TEHRAN, Young Journalists Club (YJC) - On Saturday, some 2,000 members of the leftist party gathered for a convention in Sau Paulo and declared him their candidate to rerun for office in the October presidential election.

Lula was the 35th president of Brazil from 2003 to 2011, with an approval rating of above 80 percent, and has been serving a 12-year prison sentence since April after being found guilty of corruption. The 72-year-old veteran politician dismisses his conviction as part of a plot to prevent him from returning to power.

Lula leads most opinion polls in the Latin American country but may not be allowed to stand. Under Brazilian electoral law, politicians are not authorized to run for office within eight years of being found guilty of a crime.

In the convention of party members, many of whom wore Lula masks, a letter from the former president was read out.

The leftist party has until Monday to name Lula’s running mate.

PT leaders, including Party President Senator Gleisi Hoffmann, denied they have an alternative candidate to stand in Lula’s place should he be barred from running, as is widely expected. 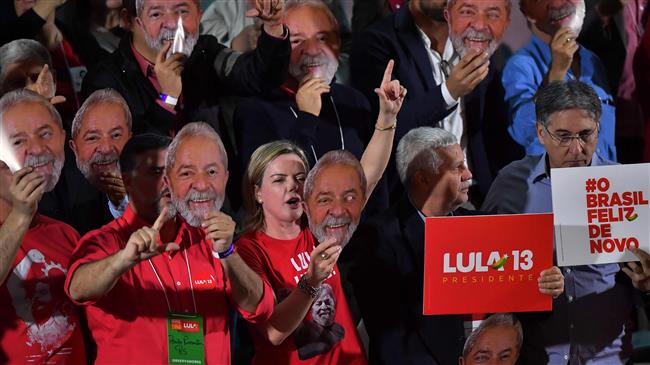 Lula was convicted of taking $1.2 million in bribes from Brazilian construction giant Odebrecht in return for granting the company public contracts. He also faces another six trials for other corruption allegations but has denied any wrongdoing.

Lula has been battling to overturn his sentence in the hopes of making another presidential bid in the election. According to a recent poll, he could win more than twice the support of his nearest challengers if he runs in the vote.

Two other candidates were also nominated on Saturday, namely Marina Silva by the center-left Brazilian Sustainability Network Party (REDE), and Geraldo Alckmin by the center-right Social Democracy Party. They are placed second and third respectively — behind far-right candidate Jair Bolsonaro — in early polling that excludes Lula.

Brazil’s electoral court will decide by next month whether Lula can run in the election.