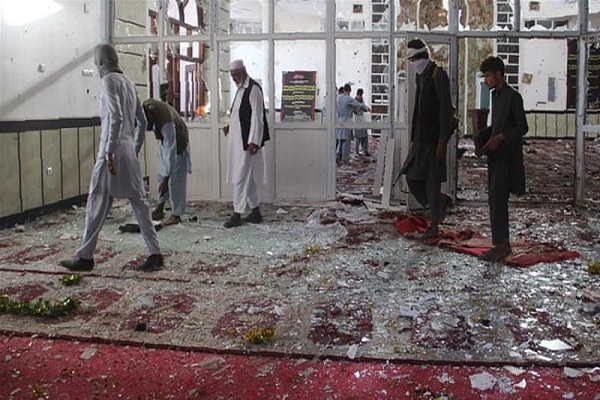 TEHRAN, Young Journalists Club (YJC) - In his statement, Ghani called the attack an act against Islam and a criminal act.

“Such criminal acts of terrorists among our people cannot create religious divisions, because Afghanistan is exemplary in Islamic unity and religious affiliation in Islamic countries, and this will remain unchanged forever,” Ghani said in the statement.

The blasts happened when two suicide bombers entered Sahib-ul-Zaman Mosque in Khwaja Hassan area in Gardez’s PD2 at around 1:20pm local time and first opened fire on worshippers before detonating their suicide vests.

Interior Ministry’s deputy spokesman Nusrat Rahimi said 20 of those wounded are in critical condition and that the death toll may rise.

As there were civilian houses near the mosque, women and children were among the scores of civilian casualties, UNAMA statement said.

“This attack targeting civilians has no possible justification,” said Tadamichi Yamamoto, the UN Secretary-General’s Special Representative for Afghanistan and head of UNAMA. “Those who are responsible for enabling this attack must be brought to justice and held to account.”

The statement further said: “The attack on Friday is the latest in a pattern of attacks against mosques, particularly Shia religious sites. International humanitarian law prohibits deliberate attacks against civilians and civilian property, including places of worship, and also places a specific obligation on parties to enable religious personnel to carry out their work.”

“These brutal and senseless attacks against people at prayer are atrocities,” said Yamamoto. “Such attacks directed against congregations and places of worship are serious violations of international law that may amount to war crimes.”

UNAMA expressed its condolences to the loved ones of those killed in the attack and wished full and speedy recovery to those injured.

The Taliban has denied any involvement in the attack.