TEHRAN, August 5 - U.S. Secretary of State Mike Pompeo called on nations to adhere to U.N. Security Council sanctions against North Korea, in the face of reports indicating Russia may not be following through. 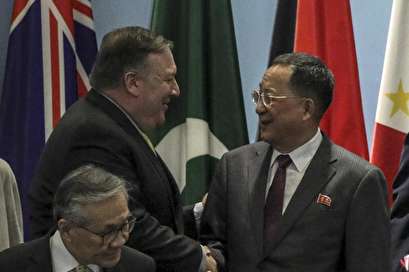 TEHRAN, Young Journalists Club (YJC) -U.S. Secretary of State Mike Pompeo called on nations to adhere to U.N. Security Council sanctions against North Korea, in the face of reports indicating Russia may not be following through.

The Wall Street Journal first reported this week Russia is granting new work visas to thousands of North Korean laborers, despite Russia's promise earlier this year it would send back all North Korean workers by the end of 2019. As part of its sanctions against Kim Jong Un's regime, the U.N. Security Council has prevented governments worldwide from granting new work permits to North Koreans.

Pompeo's remarks also followed reporting this week that a confidential U.N. report indicates North Korea is continuing to develop nuclear weapons and missile programs by defying sanctions through diplomats based overseas. CNN obtained a copy of the report.

"We have seen reports that Russia is allowing for joint ventures with North Korean firms and granting new work permits to North Korean guest workers," Pompeo said in a speech in Singapore for an Association of Southeast Asian Nations ministerial meeting Saturday. "If these reports prove accurate -- and we have every reason to believe that they are -- that would be in violation of U.N. Security Council Resolution 2375."

Pompeo warned Russia at the conference not to help North Korea cheat on sanctions.

"We expect the Russians and all countries to abide by the U.N. Security Council resolutions and enforce sanctions on North Korea," Pompeo said. "Any violation that detracts from the world's goal of finally fully denuclearizing North Korea would be something that America would take very seriously."

Pompeo's remarks came after he announced the United States would fund nearly $300 million to advance security throughout southeast Asia.

"I've also emphasized the importance of maintaining diplomatic and economic pressure on North Korea to achieve the final, fully verified denuclearization of [North Korea], as agreed to by Chairman Kim," he continued.

Ri said denuclearization should happen "slowly but surely," in a phase-by phase process.

President Donald Trump has heralded his meeting with North Korean leader Kim at a June summit in Singapore as a "first bold step," toward peace.

Kim had announced his commitment to denuclearize the Korean peninsula in March followed by a landmark agreement with South Korea in April to achieve full denuclearization.

Share to
Related News
Trump says his son sought information on Clinton from Russians in 2016
Pompeo: US will ‘fully’ enforce sanctions on Iran
No US govt. involvement in drone attack against Venezuela president: Bolton
In blow to Trump, China rejects US request to cut Iran oil imports
US citizen held in Vietnam for attempt to 'overthrow state'
US threats of sanction in pastor's case shows 'Zionist mentality': Erdogan
Tags
Pompeo ، sanctions ، Korea
Your Comment