Protesters rally against US gun violence at NRA headquarters

TEHRAN, August 5 - Hundreds of protesters have rallied outside the headquarters of the National Rifle Association (NRA), calling for stricter gun-control measures and a change to the powerful gun lobby’s tax-exempt status. 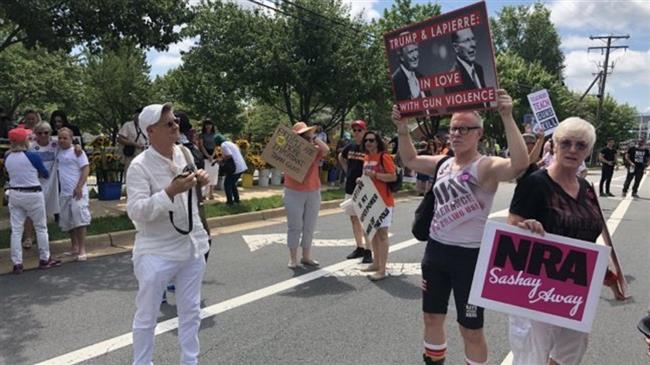 TEHRAN, Young Journalists Club (YJC) - The protesters met Saturday for the "National March on NRA" in Fairfax, Virginia, carrying signs and chanting slogans against the NRA and gun violence across the US.

Demonstrators shut down a portion of road leading the organization’s headquarters, where they encountered counter-protesters supporting gun ownership.

"Hey, hey, ho ho, the NRA has got to go," the crowds chanted while NRA supporters, some armed with weapons, waved  banners of US President Donald Trump and held up signs, including one reading "Tyranny: When you disarm me."

Police officers, along with white and orange barriers, separated the protesters from NRA supporters.

The protest is just the latest to target the organization and demand stricter gun control laws after a string of mass shootings in recent months, including the massacre in February at Marjory Stoneman Douglas High School in Parkland, Florida.

Seventeen people were killed on February 14 when a gunman opened fire on students and faculty at the Florida high school, sparking months of nationwide outrage, protests, and walkouts.