TEHRAN, August 5 -The Egyptian military has killed at least 52 militants in recent days across the Sinai Peninsula in line with a push for the elimination of the Daesh Takfiri terrorists there. 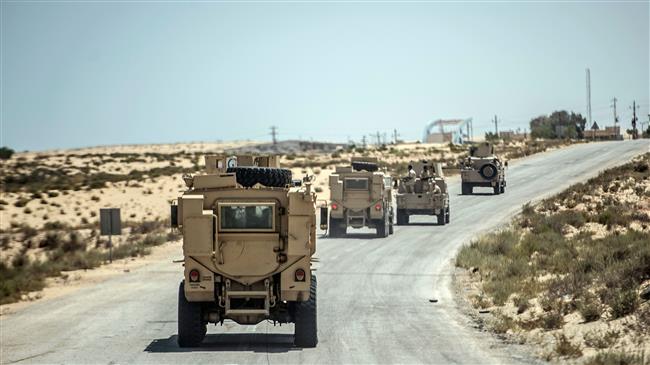 TEHRAN, Young Journalists Club (YJC) -The Egyptian Defense Ministry said in a statement on Sunday that 13 "extremely dangerous Takfiris" were killed in an operation by security forces in the city of el-Arish, the capital of North Sinai province. The remaining 39 militants were killed in various military operations across northern and central Sinai.

Elsewhere in the statement, the ministry said the troops also destroyed 15 vehicles laden with weapons and munitions while trying to infiltrate the western border.

The latest operation brings to more than 300 the number of militants killed by the Egyptian military since February, when it began a campaign to eradicate insurgents behind a wave of violence in the desert region. Over 30 Egyptian military personnel have also been killed ever since.

The campaign was ordered by President Abdel Fattah el-Sisi in the wake of an attack on a mosque in November 2017, when hundreds of worshippers died.

The Sinai Peninsula has been under a state of emergency since October 2014, after a deadly terrorist attack left 33 Egyptian soldiers dead.

Over the past few years, terrorists have been carrying out anti-government activities and fatal attacks, taking advantage of the turmoil in Egypt that erupted after the country’s first democratically-elected president, Mohamed Morsi, was ousted in a military coup in July 2013.

The Velayat Sinai group, which is affiliated with Daesh, has claimed responsibility for most of the assaults. The group later expanded its attacks to target members of Egypt’s Coptic Christian community as well as foreigners visiting the country, prompting Cairo to widen a controversial crackdown, which critics say has mostly targeted dissidents.

Ridding the region of militancy after years of unrest has been a promise of Sisi, who was re-elected in March in a landslide victory against no real opposition. Sisi's critics say his presidency has brought a harsh crackdown on dissent.