Turkey's president to meet Merkel in Germany next month 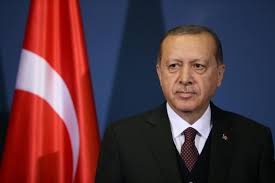 Merkel spokeswoman Ulrike Demmer said Wednesday the chancellor will meet him and "all the important issues, including differences, will be addressed." She added that details of the visit have yet to be worked out.

Turkey's detention of German citizens for what Berlin considers political reasons in the aftermath of the failed 2016 coup attempt in Turkey has been a major irritant in relations. Foreign Ministry spokesman Rainer Breul said seven are currently in detention.