TEHRAN, August 8 - United Nations aid agencies called on Myanmar on Wednesday to improve conditions in Rakhine state for the safe return of hundreds of thousands of Rohingya refugees from Bangladesh and provide a clear pathway to citizenship for those eligible. 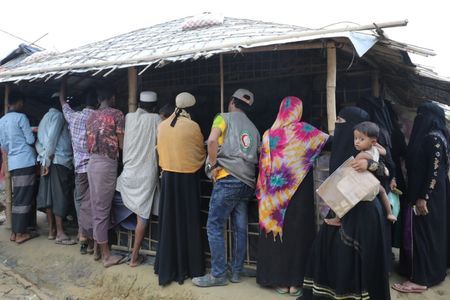 TEHRAN, Young Journalists Club (YJC) - The U.N. High Commissioner for Refugees (UNHCR) and U.N. Development Programme (UNDP) said in a joint statement that they needed full access to Rakhine state and were still awaiting permission for international staff to be based in the town of Maungdaw following requests made on June 14.

There was no immediate response from the Myanmar authorities to a Reuters request for comment.

The United Nations signed an outline deal with Myanmar in early June aimed at eventually allowing hundreds of thousands of Rohingya in Bangladesh to return safely and by choice. But the secret agreement, seen by Reuters, offers no explicit guarantees of citizenship or freedom of movement throughout the country.

The U.N. agencies said that substantial progress was urgently needed in three key areas: "granting effective access in Rakhine State; ensuring freedom of movement for all communities; and addressing the root causes of the crisis".

More than 700,000 Rohingya fled Myanmar's western Rakhine state after a military crackdown that started in August last year in response to attacks by ARSA, a Rohingya armed group, on security posts.

Myanmar has rejected accusations of ethnic cleansing and dismissed most accounts of atrocities, blaming Rohingya "terrorists". It says it is ready to accept back those who fled.

The Rohingya, who regard themselves as native to Rakhine state, are widely considered as interlopers by Myanmar's Buddhist majority and are denied citizenship.

The U.N. said that Rohingya remaining in Rakhine are under local orders that severely restrict their freedom of movement, preventing them from reaching jobs, school and health care, and called for these to be lifted.