TEHRAN, August 10 - Romanians who live abroad have begun an anti-government protest in Bucharest, urging the left-wing government to resign and call an early election. 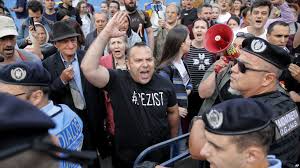 TEHRAN, Young Journalists Club (YJC) - The expatriates, some of whom drove across Europe to attend the demonstration Friday, are angry about how Romania is governed. Some of the estimated 3 million Romanians living abroad say they left because of corruption, low wages and lack of opportunities.

Hundreds of protesters waved Romanian and European Union flags, yelling "Justice, not corruption!" outside government offices in the capital. The protest is expected to swell Friday evening.

Since the Social Democrats won power in 2016, Romanians have regularly protested government moves to put in new laws that critics say weaken the nation's fight against corruption.