TEHRAN, August 10 - US President Donald Trump has announced to double steel and aluminum tariffs on Turkey, saying relations between Washington and Ankara “not good” as tensions mount between the two countries. 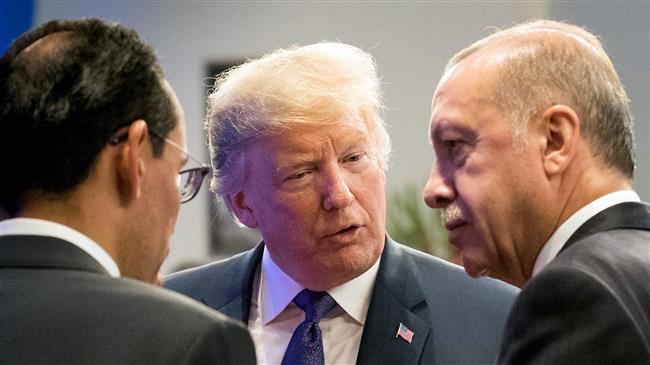 TEHRAN, Young Journalists Club (YJC) - "I have just authorized a doubling of Tariffs on Steel and Aluminum with respect to Turkey as their currency, the Turkish Lira, slides rapidly downward against our very strong Dollar!" Trump said on Twitter.

Trump's announcement came shortly after Turkish President Tayyip Erdogan called on Turks to help defend the country against the US-launched economic war against his nation. Erdogan appealed to Turks to exchange dollars and gold for Turkish lira to support the plunging currency.

The lira plunged to as low as 6 against the US dollar on Friday, a day after a Turkish delegation returned from talks in Washington with no apparent solutions to their simmering crisis.

Erdogan said that there were "various campaigns being carried out" against the country.

Relations between the two NATO allies have taken a turn for the worse amid dispute over the detention in Turkey of US evangelical pastor Andrew Brunson on terrorism charges.

Trump wrote on Twitter late last month that his country "will impose large sanctions on Turkey for their long time detainment of Pastor Andrew Brunson.”

Erdogan responded by announcing to freeze the assets in Turkey of US ministers of "justice and interior," in tit-for-tat response to US sanctions.

Ankara and Washington also disagree over their military interventions in the Syria war, Turkey's plan to buy missile defense systems from Russia and the US conviction of a Turkish state bank executive on sanctions-busting charges in January.