TEHRAN, August 10 - Four people, including two police officers, have been killed in a shooting attack in Canada's eastern city of Fredericton. 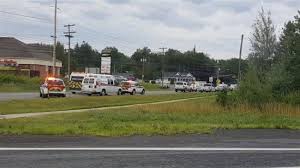 TEHRAN, Young Journalists Club (YJC) -The Fredericton police said in a Twitter posting on Friday that one suspect had been arrested.

The shooting was described by the police as an "active incident," and the public was urged to "stay in their homes with doors locked at this time for their safety."

Video footage of the shooting area posted by a local journalist on social media showed police cars and emergency vehicles at the scene of the incident.

In 2014, another shooting in New Brunswick, the capital of which is Fredericton, left three Royal Canadian Mounted Police officers dead. At the time, the incident was one of the worst of its kind in Canada, where gun laws are stricter than they are in the United States and deadly attacks on police are rare. However, a recent proliferation of weapons has led to an increase in gun violence in Canada in the past years.

On Thursday, Ontario's provincial government vowed to spend an extra 25 million dollars to strengthen its law enforcement agency and to keep suspects incarcerated while they await trial on gun crime charges.