Trump as strongly disliked by US public as Nixon before downfall: New poll

TEHRAN, August 12 - A new poll has found that US President Donald Trump is as highly disliked by American people as former President Richard Nixon, just prior to his resignation as the result of the infamous Watergate scandal. 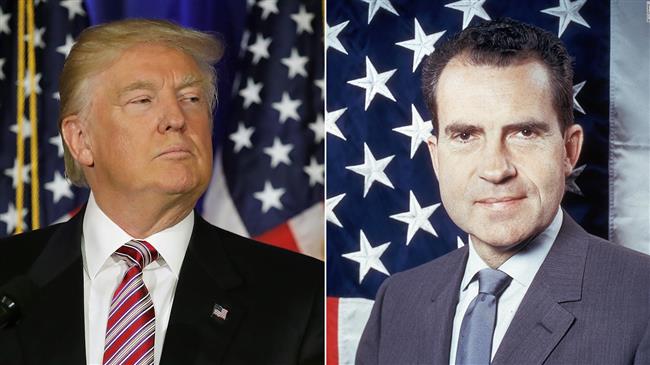 According to the poll, only 20 percent of respondents rated Trump's job performance as excellent while another 20 percent said that he was doing a "pretty good" job. Less than half of Republican participants — 49 percent — further said the US president was doing an excellent job, compared to just two percent of Democrats taking part in the survey.

The Marist Poll was conducted July 19-22 and has a margin of error of +/- 3.6 percentage points, said the report.

Republican President Nixon resigned from office 44 years ago this week following the Watergate controversy, in which his administration was proven to have spied on the rival Democratic Party in its bid to win re-election.

According to the 1974 Harris poll, the majority of Americans — 56 percent — called for his impeachment and removal from office.

Veteran US journalist Carl Bernstein, who helped expose Nixon and his role in Watergate with fellow Washington Post reporter Bob Woodward, stated last week in a CNN interview that "what we are watching in the Trump presidency is worse than Watergate."

Bernstein censured the Republicans for not holding Trump accountable, insisting that the current party is not the same as the Republican “heroes” with Nixon who “demanded that he be transparent.”

The development comes as Woodward is also due to publish a Trump administration exposé – titled “Fear: Trump in the White House” -- which is scheduled for release on September 11, just weeks prior to the US midterm elections.