TEHRAN, August 12 - Iran's President Hassan Rouhani has arrived in Kazakhstan to take part in a summit of the five Caspian littoral states to conclude a landmark convention on the legal status of the inland waters. 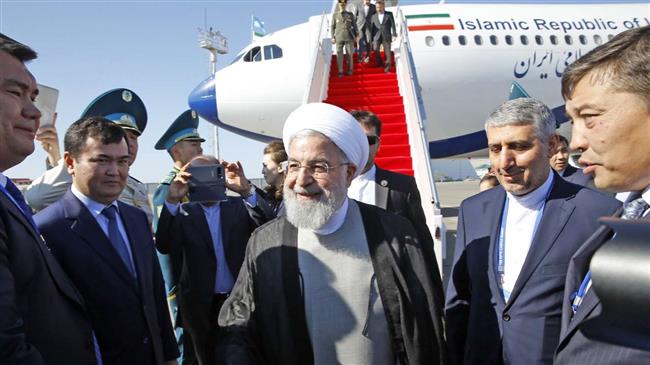 TEHRAN, Young Journalists Club (YJC) - Before heading to the Kazakh city of Aktau, where the summit opened on Sunday, Rouhani highlighted the importance of the event which will put some of unresolved issues among the littoral states to rest.

Under the convention, all legal issues of the sea should be implemented with the consensus of the five littoral states, the president said, stressing that the agreement did not include dividing the waters.

"The convention stipulates that all legal issues of the Caspian Sea are operational and applicable only with the consensus of the five countries, which is very important and fundamental," he said.

"The convention completely prohibits the movement of foreign military ships in the sea, which is of great importance to the national security of the Caspian states," Rouhani added.

The Caspian Sea is a landlocked body of water and is thus not a sea, but by virtue of its size as well as the special features of its water and seabed, it is not a lake either.

Rouhani stated that the new draft agreement completely differentiates the legal regime of the Caspian Sea from the United Nations Convention on the Law of the Sea.

The legal status of the largest inland body of water in the world with its abundance of hydrocarbon reserves has been the subject of fraught negotiations for over two decades since the Soviet Union's collapse.

There are an estimated 48 billion barrels of oil and 292 trillion cubic feet (8.3 trillion cubic meters) of natural gas in proven and probable reserves in the Caspian basins and its surrounding area.

The Caspian Sea is also the natural breeding ground for the best sturgeon species including the giant beluga fish from which one of the world's priciest delicacies, caviar, is extracted.

Sturgeon stocks, however, have severely been depleted as a result of overfishing, with environmentalists hoping that the new agreement will boost preservation efforts.

Rouhani said the convention specifies exclusive fishing and shipping areas, but leaves issues related to the baseline and the sea's basin and under the basin to future agreements among the Caspian states.

A baseline is the line along the coast from which the seaward limits of a state's territorial sea and certain other maritime zones of jurisdiction are measured, such as a state's exclusive economic zone.

"Some issues have been resolved and some issues remain (unresolved) and these two issues, one being the baseline and the other the extent of the basin and under the basin, remain to be resolved in future agreements," Rouhani said.

"Taken together, this is an important convention which moves us one step forward, although there are still very important issues for the future" to be resolved, he added.

In addition to the convention, other documents will be signed for cooperation on trade, economy, transportation, fighting terrorism and organized crime, and border cooperation.

Rouhani said the Caspian states have great potentials and opportunities for cooperation, especially in the fields of economy, transportation of goods and passengers, as well as tourism, which will be discussed during the summit.

"Cooperation among the countries on extraction and exploitation of oil, as well as oil and gas swaps are among issues always discussed between us and the other littoral states and these debates will continue at the summit."

Caspian states have made connectivity the cornerstone of their regional cooperation, drawing up development strategies in line with China’s massive project to build a modern-day “Silk Road.”

Rouhani touched on two transportation corridors via Iran which connects countries on both the western and eastern sides of the Caspian Sea to the Persian Gulf and the Sea of Oman.

The North-South Transport Corridor (NSTC) through Turkmenistan links the subcontinent to the Middle East, the Caucasus, Central Asia and Europe, which has drawn great interest from Russia and India.

Iran and Azerbaijan are also building the Rasht-Astara railway which provides an alternative route to the corridor.