TEHRAN, August 12 - Thousands of Arabs and Israelis have protested in Tel Aviv against Israel’s controversial “nation-state” law that declares the occupying entity “the nation-state of the Jewish people.” 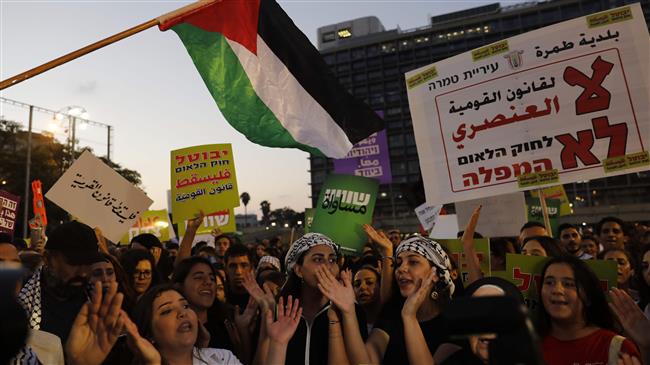 TEHRAN, Young Journalists Club (YJC) - The late Saturday rally reportedly featured a record number of Palestinians, who performed evening prayers before joining others in the march as they waved Palestinian flags.

The protest had been organized by the Higher Arab Monitoring Committee, an organization coordinating political activism among various Arab-Israeli bodies.

“We are not second class!” chanted the protesters, raising banners that read in both Arabic and Hebrew, “Nation-State Law - Official Apartheid.”

“There is not one constitution in the world that does not include in its clauses the right to equality for all of its citizens and residents,” the committee’s chair Mohammad Baraka said.

“We are here together, Arabs and Jews, to say it’s unacceptable – neither apartheid nor genocide.”

The thousands of Israeli Jews who joined the protest in solidarity included supporters of anti-occupation group Peace Now, members of the anti-racist group Standing Together, and Amos Schoken, publisher of the liberal daily newspaper Ha’aretz.

The Knesset (Israel’s parliament) adopted the bill on July 19.

It prioritizes “Jewish” values over democratic ones in the occupied territories and declares Jerusalem al-Quds the “capital” of Israel. It also allows the existence of Jewish-only communities, and sets Hebrew as the official language, relegating Arabic from an official language to one with “special status.”