TEHRAN, August 12 -Egyptian police forces have killed 12 suspected members of a terror outfit affiliated to the Daesh Takfiri terrorist group in the north of the Sinai Peninsula during an intense gunfight in the region, the interior ministry says. 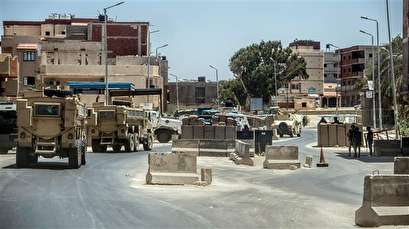 TEHRAN, Young Journalists Club (YJC) -Egyptian police forces have killed 12 suspected members of a terror outfit affiliated to the Daesh Takfiri terrorist group in the north of the Sinai Peninsula during an intense gunfight in the region, the interior ministry says.

According to a statement released by the Ministry of Interior of Egypt on Saturday, the heavy shootout occurred near the coastal city of el-Arish after authorities received information that “terrorist elements” were hiding in the area and were planning to carry out hostile operations.

Acting on the tip-off, counterterrorism security forces besieged the designated area and began exchanging fire with the terrorists, who were reportedly members of the Velayat Sinai outfit.

The hideout was located in Malalaha area, which is adjacent to the el-Arish police station, the statement added.

The terror group, previously known as Ansar Beit al-Maqdis, pledged allegiance to Daesh in 2014, and has mainly attacked security forces in the restive region of Sinai Peninsula since its inception in 2013. The terrorists have so far killed hundreds of members of security forces.

The ministry statement did not report any casualties among security forces. Neither did it specify the exact time and date of the incident. However, it added that four automatic rifles, a sniper rifle, some ammunition and a number of improvised explosive devices had been found at the site.

Operation Sinai 2018, which involves security forces mobilized from the air force, navy, army and police, aims to tighten control on border districts and clean up areas where there are terrorist hotbeds. The Sinai Peninsula has been under a state of emergency since October 2014.

According to figures provided by the military, more than 250 suspected terrorists and at least 35 soldiers have so far been killed in the Sinai 2018 anti-terror operation.

Terrorists have been targeting both government forces and civilians with terror attacks, taking advantage of the turmoil in Egypt that erupted after the country’s first democratically-elected president, Mohamed Morsi, was ousted in a military coup in July 2013.