TEHRAN, August 12 -Malians voted in a run-off presidential election under heavy security on Sunday, with incumbent Ibrahim Boubacar Keita expected to win a second term despite a surge in ethnic and militant violence during his tenure. 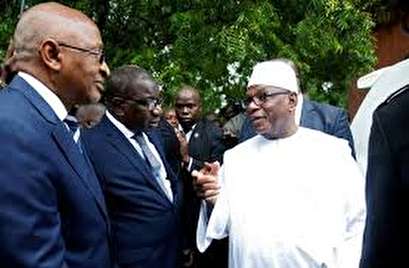 TEHRAN, Young Journalists Club (YJC) -Malians voted in a run-off presidential election under heavy security on Sunday, with incumbent Ibrahim Boubacar Keita expected to win a second term despite a surge in ethnic and militant violence during his tenure.

Keita, 73, is running against Soumalia Cisse, 68, the main opposition leader and a former finance minister.

The first round on July 29 was marred by armed attacks and other security incidents at about a fifth of polling places, as well as opposition charges of fraud.

As voting progressed throughout Sunday, however, no serious incidents had been reported. Soldiers ran body checks on voters in the capital Bamako as they waited in line under rainy skies to cast their ballots.

Dramane Camara, 31, was the first to vote at one polling station in a school in the capital Bamako.

“I voted without problem, I came to fulfill my duty as a citizen,” Camara said. “I expect the new president to solve the problem of the North, which is peace. Because the return of peace means the return of NGOs, investors, so creating jobs.”

The chaotic first round was a reminder that militants, some linked to al Qaeda and Islamic State, have regrouped since French troops intervened in 2013 to push them back from areas they had seized in Mali’s desert north.

They are now expanding their influence again across the north and into the fertile center.

Their presence in the vast West African nation and their ability to spread violence to its neighbors has kept Mali high on the list of Western powers’ security concerns. Former colonial ruler France and the United States have deployed thousands of troops across the region.

Keita called for a peaceful day and urged people not to respond to any provocation as he voted in Bamako on Sunday morning. “I pledge that all the difficulties we faced are now behind us,” he told cheering supporters.

The government has stepped up security for the run-off, deploying an extra 6,000 troops on top of the 30,000 already on duty. The Mopti region in central Mali, where most of the attacks in the first round took place, is a particular concern.

The head of the European Union observer mission, Italian politician Cecile Kyenge, told reporters there had been no major incidents at 40 polling stations it had monitored. She added that 95 percent of them had opened on time.

The mission had deployed 90 observers across the country “but unfortunately not to Timbuktu, Mopti and Kidal” — areas where violence has been rife.

Keita took 41 percent of the vote in last month’s first round against nearly 18 percent for Cisse.

Cisse, who lost against Keita before in a peaceful 2013 run-off, accused Keita’s government of voting fraud in the first round this time but the constitutional court upheld the result.

Cisse blames Keita for the worsening violence and accuses his government of rampant corruption. Civil society website Malilink recorded 932 militant attacks in the first half of 2018, almost double that for all of 2017.