TEHRAN, August 12 - A supporter of Nicaragua's President Daniel Ortega was shot to death in the northern city of Matagalpa as anti-government protesters marched past the city hall, police said. 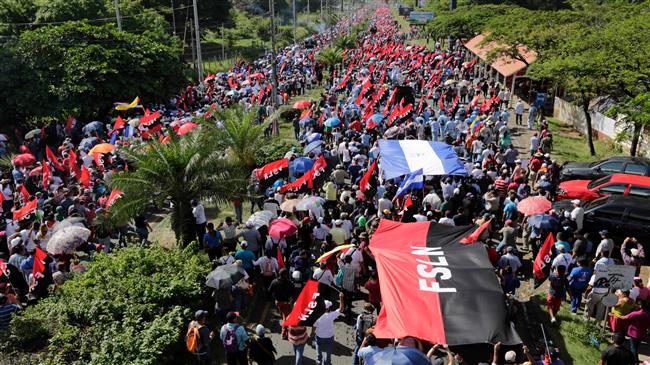 TEHRAN, Young Journalists Club (YJC) -The incident Saturday came amid a wave of protests and counter-protests in several Nicaraguan cities, including the capital Managua.

Police identified the gunshot victim in Matagalpa as Lenin Mendiola, the son of a longtime leader of the ruling Sandinista Front, according to a police statement reported by local media.

Other media, however, reported that pro-government paramilitaries fired on protesters in Matagalpa.

More than 300 people have been killed and 2,000 wounded since anti-government protests erupted in mid-April, according to human rights groups. The government puts the death toll at nearly 200.

Ortega, a 72-year-old former guerrilla who has held power for 22 of the last 39 years, has responded with a bloody crackdown by security forces and paramilitaries. Managua was the scene Saturday of rival marches for and against Ortega and his wife Rosario Murillo.

Tens of thousands of people demanding the release of jailed protesters joined the march against Ortega, who is in his third term as president since returning to power in 2007.

Supporters of the Ortegas, meanwhile, marched along a separate route under a sea of red-and-black Sandinista banners, chanting for retribution against their opponents.