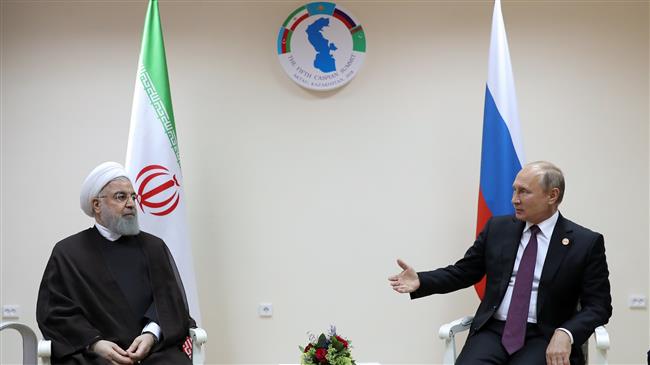 TEHRAN, Young Journalists Club (YJC) -"We should make efforts to turn the Caspian [Sea] into the sea of peace and friendship, and a ground for further strengthening of relations, cooperation and friendship among the littoral states," Rouhani said in a meeting with his Russian counterpart, Vladimir Putin, in the Kazakh port city of Aktau on Sunday.

The Iranian and Russian presidents held the meeting on the sidelines of the 5th Caspian Summit where the presidents of the five states bordering the resource-rich Caspian Sea signed a historic convention on the sea's legal status after more than two decades of discussions.

The Caspian Sea convention has been drawn up in 24 articles with the most important highlights being a ban on military presence of all foreign countries in the sea and transit of military consignments belonging to foreign countries.

Elsewhere in the meeting, the Iranian president commended Tehran-Moscow cooperation on regional and global developments and said, "Bilateral and multilateral cooperation involving Iran and Russia in different regional and international issues, including in the field of regional security and the fight against Daesh terrorism in Syria, have had positive outcomes in the region."

Rouhani emphasized that Tehran and Moscow must continue cooperation "until the full eradication of terrorism."

Syria has been gripped by foreign-backed militancy over the past five and a half years, which has claimed the lives of thousands of people.

Iran has been providing military advisory assistance to the Syrian government in its campaign against terrorism. Russia has also been helping Syria in the fight against terrorism with Russian warplanes pounding the positions of terrorists in Syria since September 30, 2015, upon a formal request from Damascus.

Russia ready to boost cooperation with Iran in line with common interests: Putin

The Russian president, for his part, pointed to his country's growing relations with Iran in various fields and expressed Moscow's readiness to further boost relations with Tehran in line with common interests.

He said all remaining parties to the deal, signed between Iran and the five permanent members of the UN Security Council plus Germany, must make efforts to save the JCPOA after the US’ unilateral withdrawal from it.

US President Donald Trump pulled the US out of the Iran nuclear agreement in May and said he planned to reinstate US nuclear-related sanctions on Iran and impose "the highest level" of economic bans on the Islamic Republic.

The Russian president has said that the United States' move to impose "unilateral" sanctions against Iran will result in "harmful" consequences.

The Russian president emphasized that "unilateral" steps taken by countries like the United States, led to a "dead-end and were always counterproductive."

In a meeting with his Kazakh counterpart, Nursultan Nazarbayev, the Iranian president said Tehran attached great importance to ties with Astana and added that the two sides had close stances on various issues and common interests in the region.

Rouhani said Tehran and Astana supported each other on regional and international issues, noting that Kazakhstan had played an active and influential role in the developments in the region, particularly the Syrian peace talks.

“Kazakhstan has always stood by the Iranian nation in international issues, including the JCPOA," he stated.

The Kazakh president, for his part, said Iran was a friendly country and regional partner of Kazakhstan, adding that Astana sought further development of relations with Tehran.

Nazarbayev emphasized that his country supported the full implementation of the JCPOA and was determined to bolster relations with Iran in all sectors.