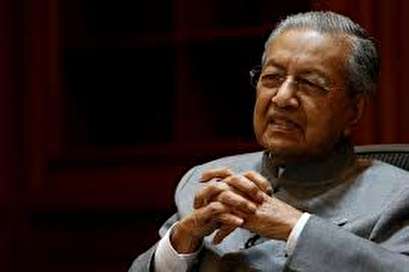 Authorities in Malaysia and the United States are investigating how billions of dollars went missing from 1MDB. The DOJ says over $4.5 billion was misappropriated from the fund, with some of the money used to buy the private jet, a superyacht, Picasso paintings, jewelry and real estate.

Last week, the $250 million superyacht Equanimity, which the DOJ says was also bought by Jho Low, was handed over to Malaysia by Indonesia, which had seized the asset earlier this year.

When asked if Malaysia would also seek to take possession of the Bombardier jet, Mahathir said: “Yes, I think so. We have to bring it back,” state news agency Bernama reported on Sunday.

The jet was grounded last year in Singapore, according to some media reports.

Aviation services firm Jet Aviation said a Bombardier Global 5000 with the same registration number as the one identified by DOJ was at its facility at Seletar Airport in Singapore.

A spokeswoman for Jet Aviation said the firm was “working closely with the local authorities”. She declined to say how the firm came to be in possession of the aircraft.

Singapore, one of at least six countries investigating 1MDB, said in 2016 it had frozen about S$120 million ($87.24 million) of funds and properties in the city-state belonging to Low and his immediate family.

Malaysian authorities have issued an arrest warrant for Low, whose whereabouts are unknown. Low, whose Malaysian passport has been revoked, has previously denied any wrongdoing.

A representative for Low has said the handing over of the Equanimity yacht to Malaysia was illegal and in violation of Indonesian and U.S. court orders.

A spokesman for Low, through his attorneys, on Monday said if Mahathir’s intention to seize the private jet was “anything like his illegal seizure of the Equanimity,” Mahathir will ignore ongoing legal processes and conduct a trial by media.

In civil lawsuits filed in the United States, the DOJ is seeking to seize assets that were allegedly bought with 1MDB money.