TEHRAN, August 13 - Thousands of mourners on Monday buried dozens of children killed in a Saudi-led coalition air strike on a bus in northern Yemen, one of the deadliest attacks on civilians in the three-year-old war. 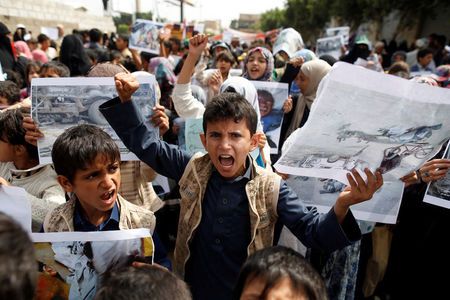 TEHRAN, Young Journalists Club (YJC) - At least 40 children were killed in Thursday's raid which hit the bus as it drove through a market of Dahyan, a town in Saada, controlled by Houthis.

Wooden coffins, most with a picture of a child, were taken by cars and carried by pall bearers to a graveyard from a square where prayers were held earlier. "Death to America, death to Israel," the crowd chanted.

The shrouded bodies were removed from the coffins and placed in a row of unmarked graves that had been dug on Friday.

"My son went to the market to run house errands and then the enemy air strike happened and he was hit by shrapnel and died," said Fares al-Razhi, mourning his 14-year-old son, Reuters reported.

"For my son, I will take revenge on Salman and Mohammed Bin Zayed," he said, referring to leaders of Saudi Arabia and the United Arab Emirates (UAE).