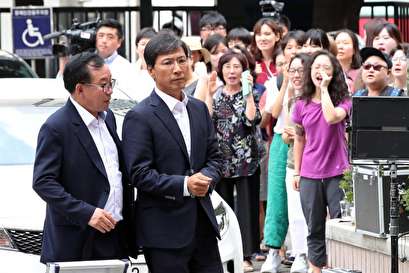 "The evidence provided by prosecutors wasn't enough to prove the violation of sexual freedom and whether (sexual intercourses) were done without consent," the Seoul Western District Court said on Tuesday.

Ahn has been accused of sexually assaulting his secretary multiple times from last year to earlier this year. The former governor is the first high-profile figure to stand trial on sexual abuse allegations since the #MeToo movement started in South Korea.

"I apologize to the Korean people. I feel ashamed. I've disappointed you. I will try to be reborn now. I'm ashamed and sorry," said Ahn to reporters outside the court after the verdict.

In March, Ahn's former secretary Kim Ji-eun appeared in a TV news interview to accuse her boss of sexual assaults.

The trial on Tuesday was observed by Ahn's supporters, women's rights groups and supporters.

When the verdict was announced, Ahn's supporters hailed the victory while women's rights activists were shocked and lost for words.

"I feel outraged and I can't believe it," Lee Han, a member of a women's rights group, told UPI. "This court failed to listen to the victim's voice and women's voices," she said.

A joint committee of women's rights groups released a statement, saying the court didn't take into account victim's testimonies and failed to read into complexities of the case.

"Such a narrow finding and judgment. It didn't even live up to latest court rulings on sexual abuse cases," the statement read.

Jeong Hye-sun, a lawyer representing former secretary Kim, said the court ruling is a setback for human rights in South Korea and disappointment for victims of sexual abuse.

"The court ruling has only left disappointment to many silent victims of sexual abuse," she said at a press conference on Tuesday.

"I have to question why is it so hard to listen to the victim's claim that there was no consent," said Jeong.

Jeong told that Kim said she won't be discouraged by the verdict today and will move on to win the trial.

More than 80 men have been accused of sexual abuse allegations since the #MeToo movement. Of them, 38 are under investigation or trials, including former high-ranking justice ministry official Ahn Tae-geun and prominent director Lee Yoon-taek, according to Donga Ilbo.