Philip Wilson: Ex-archbishop in cover-up to be detained at home 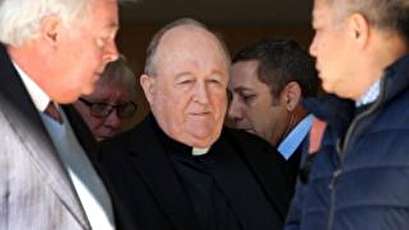 The decision means Philip Wilson, who resigned as archbishop of Adelaide after his conviction, will avoid jail.

Wilson, 67, is the world's most senior Catholic cleric to be convicted of covering up sexual abuse.

His lawyers said they would lodge an appeal on Tuesday.

A magistrate said Wilson would commence his sentence immediately at a relative's home, where he would be monitored by a tracking device. He will be eligible for parole after six months.

As he left court on Tuesday, Wilson did not respond to an abuse survivor who confronted him to demand an apology.

'No remorse or contrition'

During his trial, Wilson denied knowing that paedophile priest James Patrick Fletcher had abused altar boys in the 1970s.

However, the court ruled in May that Wilson had been alerted to the abuse by victims, and failed to report it.

Fletcher was convicted of nine child sexual abuse charges in 2004, and died in jail in 2006.

Magistrate Robert Stone said Wilson had stayed silent out of a desire to protect the Church's reputation.

Last month, he ordered Wilson to be assessed for home detention. Magistrate Stone said the senior clergyman had shown "no remorse or contrition" during the trial.

On Tuesday one of Fletcher's victims, Peter Gogarty, approached Wilson to call for an apology.

He remained silent, but one of his supporters confronted Mr Gogarty. "I haven't got time for rubbish like you, mate," the supporter said, Australian media reported.