TEHRAN, August 13 -At least three Saudi soldiers have been killed when Yemeni army soldiers and allied fighters from Popular Committees launched an attack against a military base in Saudi Arabia’s southwestern border region of Jizan as they continue their retaliatory raids against Riyadh regime’s aerial bombardment campaign. 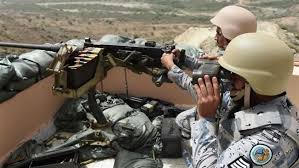 TEHRAN, Young Journalists Club (YJC) -Yemeni forces and their allies fatally shot the troopers in the al-Farizeh military base of the region, located 969 kilometers south of the Saudi capital city of Riyadh, on Tuesday afternoon, the website of the Houthi Ansarullah movement reported.

Later in the day, scores of Saudi-backed Yemeni militiamen loyal to resigned president Abd Rabbuh Mansur Hadi were killed and injured in a roadside bomb attack in Yemen's northern province of al-Jawf.

A Yemeni military source, speaking on condition of anonymity, told Arabic-language al-Masirah television network that Yemeni army soldiers and Popular Committees fighters detonated an explosive device as a vehicle carrying the Saudi mercenaries was traveling along a road in the Khabb wa ash Sha'af district of the province.

Elsewhere in the al-Durayhimi and Hays districts of Yemen’s western coastal province of Hudaydah, a host of Saudi-backed militiamen lost their lives and sustained injuries when Yemeni forces targeted their military vehicles.

Separately, Saudi fighter jets and artillery units launched two airstrikes and a barrage of projectiles at the Shada'a district of the northwestern Yemeni province of Sa’ada. There were no immediate reports about possible casualties and the extent of damage caused.