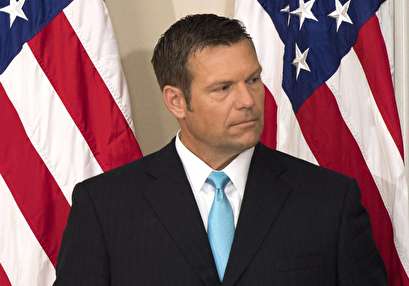 Colyer, announced his concession Tuesday night, trailing Kobach by 345 votes as provisional ballots in Johnson County were tallied a week after the election.

"This election is probably the closest in America. But the numbers are just not there unless we were to go to extraordinary measures," Colyer said.

Kobach received an additional 24 votes Tuesday after the Johnson County board of canvassers tallied the provisional ballots.

Coyler pledged to let the election results stand and not call for a recount or challenge in court.

Kobach offered praise for Colyer and added they shared many of the same principles.

"The issues that unite us are far greater than the campaign trivialities that might have separated us at times," he said. "We're both 100 percent pro-life, pro-gun, pro-taxpayer, and there's just too much at stake for the Republican party to be divided."

Kobach cited an endorsement from President Donald Trump the day for the primary for contributing to his victory.

"I think it was absolutely crucial. There's no question that the election day voting went much more strongly for me as compared to the advance voting," he said.

As head of Trump's voting commission, Kobach has advocated for restrictive voting laws and endorsed the president's claims of mass voter fraud.

Kobach will face Democratic state Sen. Laura Kelly and independent Greg Orman in the race for governor in November.