Taliban attack another army base in north Afghanistan

TEHRAN, August 15 - Dozens of Afghan police personnel and soldiers have been killed in a Taliban attack on a military base in Afghanistan’s northern Baghlan Province, while reports from the southeastern city of Ghazni indicate security forces have managed to push the Taliban back after five days of fierce fighting. 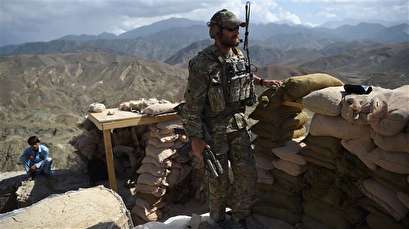 TEHRAN, Young Journalists Club (YJC) -Dozens of Afghan police personnel and soldiers have been killed in a Taliban attack on a military base in Afghanistan’s northern Baghlan Province, while reports from the southeastern city of Ghazni indicate security forces have managed to push the Taliban back after five days of fierce fighting.

In the early hours of Wednesday, the militants attacked Allahuddin base in the Baghlan-e-Markazi district of the province, killing “35 army soldiers and 10 local policemen,” said a police source.

Following the initial attack, the Taliban set fire to two other checkpoints, according to head of provincial council Mohammad Safdar Mohseni.

The Taliban have claimed responsibility for the assault.

This is the second time in two days that the militants have attacked a military base. They captured an army base in the northern province of Faryab on Monday. At least 14 soldiers were killed and over a dozen wounded in that attack.

Meanwhile, Afghan security forces have been fighting the Taliban in the strategic town of Ghazni, south of the capital Kabul.

The Taliban launched an assault on Ghazni late on Thursday. The fighting has killed at least 140 members of the security forces and dozens of civilians. Officials said hundreds of Taliban militants were also killed in the battle.

On Wednesday, residents were finally seen emerging onto the streets of Ghazni, AFP reported, saying security forces appeared to have pushed the Taliban out of the city.

Ghazni is ruined however, with a hospital overcrowded with hundreds of injured people and dozens of bodies. Many residents have also fled to Kabul.

“The city smelled of blood,” said a resident who escaped to Kabul. “People were fearful that the fighting could start again anytime.”

The International Committee of the Red Cross (ICRC) said it was providing medicine to treat the wounded at the provincial hospital. It has also sent fresh water and electricity generators for operating rooms.

“Our concern is the protection of civilians and that all wounded are able to access medical care. Health workers and health facilities must also be respected and protected,” said the head of delegation of the ICRC in Afghanistan, Juan Pedro Schaerer.

The committee also provided material for the management of the bodies of the dead, such as hygiene packages and coffins.

Schaerer said on Tuesday that “the bodies of dead persons are beginning to be collected and transported to their families, the hospital, or military bases.”

The assault on Ghazni was the largest since a ceasefire put a halt to fighting between the Taliban and security forces back in June.

The Taliban have intensified their attacks in Afghanistan. They have rejected an offer of peace talks by the Kabul government but have been talking to the US in negotiations the details of which are unclear.