Germany, Qatar vow support for Turkey amid US pressure 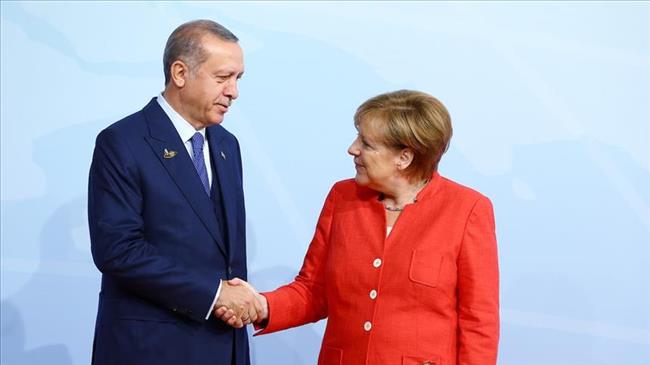 TEHRAN, Young Journalists Club (YJC) - In a Wednesday phone conversation with Erdogan, the German chancellor expressed her country’s commitment to strengthening its cooperation with Turkey through reciprocal visits at the highest levels, Turkey’s Anadolu Agency quoted presidential sources as saying.

The two sides discussed Erdogan's upcoming visit to Berlin slated for late September, and a meeting between Turkey's Treasury and Finance Minister Berat Albayrak and Germany's Economy Minister Peter Altmaier, due to be held in coming days.

According to the sources who spoke on condition of anonymity, Merkel also underlined her country's concern for a strong Turkish economy, repeating her Monday comments that Turkey’s economic prosperity “serves Germany’s interests”.

Her remarks come as US President Donald Trump's punitive measures against Turkey have pushed its lira into freefall and sent shudders through its financial markets.

The emir of Qatar also arrived in Turkey on Wednesday on a “working” visit aimed at strengthening mutual cooperation.

In a “private” meeting, Erdogan and Sheikh Tamim discussed bilateral relations and ways to expand the existing strategic ties between the two sides in various fields.

On August 10, Trump announced that his administration was doubling steel and aluminum tariffs on Turkey. The move came as part of the US’ reaction to Turkey´s two-year-long detention of an American pastor over terrorism charges.

In retaliation, Erdogan raised tariffs on some American commodities, and called on Turkish people to boycott US-made electronic goods, including Apple’s iPhones.