TEHRAN, August 16 - The Iran men’s national under-21 volleyball team has claimed the second place overall at the 2018 Asian Volleyball Confederation (AVC) Cup for Men in Chinese Taipei, after it stunningly lost to Qatar in the title challenge. 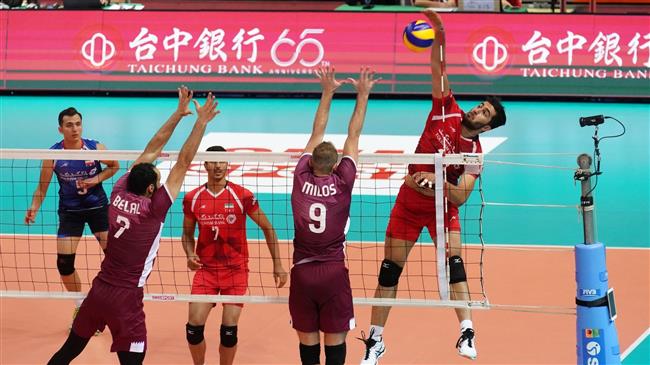 It was a tense encounter from the first set. Iran made a good start and advanced. It shook the Qatari defense from the serving line, and finally won the opener 25-23.

The young Iranian sportsmen kept on target in the second set and led from the beginning to the end for a 25-21 win.

The Qatari volleyball players, having lost two consecutive sets and seeing their hopes on the verge of collapse, struggled to rack up points as the match went into the third set.

At last, they found their rhythm coming back on track and took advantage of errors produced by their Iranian counterparts.

Both sides then traded blows as the clock ticked away before the Qatari squad proved steadier and took the set by 25 points to 22.

In the fourth set, Qatar maintained its fine form, advancing over Iran. It wrapped up the set 25-18.

The tie-breaker witnessed both sided coming out in all force to capture the crown, trading heavy blows from the first service. Qatar, however, managed to declare the end of the set at 15-10.

Meanwhile, Gim-Myeonggwan from South Korea was named as the Most Valuable Player (MVP). He won the best setter award as well.