TEHRAN, August 16 - Supporters of Malian President Ibrahim Boubacar Keita have cheered and danced after hearing about his landslide victory in a run-off against opposition rival Soumaila Cisse. 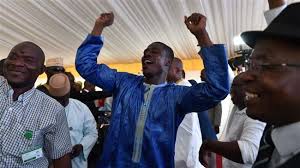 TEHRAN, Young Journalists Club (YJC) - The victory, with 67 percent of the vote, hands Keita a second five-year term in the mostly desert West African country, where militant violence and claims of fraud by the opposition marred the poll.

The mood at Cisse's campaign headquarters was somber, with one supporter saying their victory had been "stolen," adding, "If it is blood they want, that is what we will give them."

Keita, known as IBK, now faces the giant task of lifting the gold and cotton producing country out of a spiral of ethnic violence in the center and north, where attacks worsened in the months leading up to the vote despite the presence of UN and French troops.