TEHRAN, August 17 - A group of Israeli settlers have attacked an orchard in the northern part of the occupied West Bank, and chopped down hundreds of fruitful olive trees. 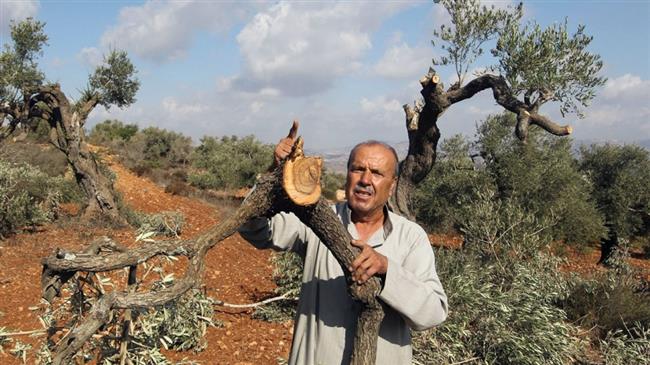 Jewish extremist settlers from Yitzhar settlement torched a Palestinian bulldozer as it was traveling along a road linking Urif village to the town of Asira al-Qibliya.

The developments came only a few hours after an unidentified 60-year-old Palestinian man ran over and killed an Israeli settler near Nablus.

The driver turned himself in to Palestinian officials shortly after the accident, saying that he had fled the site of the accident out of fear.

The agriculture industry, olive cultivation in particular, provides livelihood for some 80,000 Palestinian families living in the occupied West Bank.

Settlers, mostly armed, regularly attack Palestinian villages and farms and set fire to their mosques, olive groves and other properties in the West Bank under the so-called “price tag” policy.

Price tag attacks are acts of vandalism and violence against Palestinians and their property as well as Islamic holy sites by Israeli settlers.

Israel has reportedly uprooted more than 800,000 olive trees in the occupied Palestinian territories since 1967.

More than half a million Israelis live in over 120 settlements built since Israel’s occupation of the Palestinian territories of the West Bank in 1967. This is while much of the international community considers the settler units illegal and subject to the Geneva Conventions, which forbid construction on occupied lands.