TEHRAN, August 17 -German Chancellor Angela Merkel says she will have tough talks with Russian President Vladimir Putin on different issues but that she did not expect her meeting to produce any particular results. 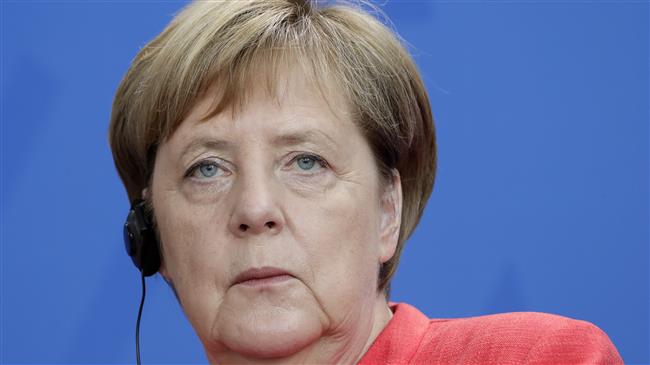 TEHRAN, Young Journalists Club (YJC) - "We want good relations with Russia and part of this is of course my meeting tomorrow. It's a work meeting from which no specific results are expected," Merkel said on Friday.

She added, "But the number of problems that occupy us - from Ukraine and Syria to the issue of economic cooperation - is so big that it is justified to be in a permanent dialogue."

The German chancellor is expected to host the Russian president from 1600 GMT at the government retreat in Meseberg castle north of Berlin, where the two sides plan to only give media statements with no joint press conference.

Merkel pointed to "controversial issues" in her Saturday talks with Putin and said, "There will of course be points where we are thinking about how we can promote and improve bilateral and international cooperation."

Russia and Western powers have been experiencing increasingly tense relations over a number of issues, including the Ukrainian conflict, Russia's support for Syria, cyber attacks and election meddling in NATO member states.

German President Frank-Walter Steinmeier in April expressed support for a series of missile strikes by the US and its Western allies on Syria, a move harshly criticized by Russia, but he warned that the West is going too far in its alienation of Moscow.

“The galloping alienation between Russia and the West must also concern us, with consequences that will go far beyond this case. There is practically no basis of trust anymore,” said Steinmeier in an interview, adding, “We are at the next step of escalation in the Russian-American relationship.”

The German president, who served for two times as the country’s foreign minister, said it was wrong to introduce Russia and its people as an enemy of Germany, saying the two countries had a rich history of cooperation on key international issues.

Despite the deterioration of relations between Moscow and Berlin, the two sides also share common concerns as they both have been targeted by US President Donald Trump in a range of different political and trade disputes.

Trump, who is fighting accusations of election collusion with Russia, launched an extraordinary tirade against Germany in July for its support for one of Europe's most contentious energy developments, calling the country “captive of Russians.”

The US president said the relationship between Germany and Russia is “inappropriate” and added that a flurry of oil and gas deals had given Moscow far too much influence over Europe’s largest economy.

Elsewhere in her remarks, Merkel confirmed an earlier announcement by Turkish President Recep Tayyip Erdogan of plans for a summit with the leaders of Russia and France on the Syria crisis, but she said no date had been set yet.

Merkel said such a four-way summit "could make sense" and added, "It must be well prepared, that's why no date has been set yet."

"But we will arrange for advisors to hold a preparatory meeting and then decide whether it makes sense to hold such a meeting together," the German chancellor pointed out.

"I have also discussed Syria during my phone conversation with Mr. Erdogan since we have a very, very tense situation in (the northwestern Syrian province of) Idlib."

According to Turkish newspapers, Erdogan said late in July that he was seeking another international summit to discuss the situation in Syria and added that he would be reaching out to his counterparts in Germany, France, and Russia.

"We will address regional topics at the four-way meeting in Istanbul," Erdogan said.

Kremlin spokesman Dmitry Peskov also said on Friday that the Russian and German leaders would hold talks about "bilateral relations as well as the implementation of major joint commercial projects, against the backdrop of threats by third countries to these projects."

Putin and Merkel last met in the Russian Black Sea resort of Sochi in May.

The German chancellor also held an unusual meeting on July 24 in Berlin with Russia's army chief of staff Valery Gerasimov.