TEHRAN, August 18 -Syria has blasted Saudi Arabia for giving money to the US-led coalition to press ahead with what Damascus has described as "destabilization plots" in the war-torn country, urging the kingdom to abandon its "dangerous policies" in the region amid fears of the re-emergence of the Daesh Takfiri terrorist group. 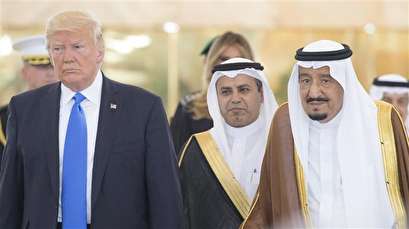 TEHRAN, Young Journalists Club (YJC) - Syria has blasted Saudi Arabia for giving money to the US-led coalition to press ahead with what Damascus has described as "destabilization plots" in the war-torn country, urging the kingdom to abandon its "dangerous policies" in the region amid fears of the re-emergence of the Daesh Takfiri terrorist group.

On Friday, Saudi Arabia announced that it had contributed $100 million to northeast Syria for "stabilization projects" in areas formerly held by Daesh.

The Saudi Embassy in Washington said the contribution "will play a critical role in the coalition's efforts to revitalize communities, such as Raqqah, that have been devastated by ISIS (Daesh) terrorists."

The US State Department welcomed Riyadh’s move, calling on Washington's allies “to do their share in this effort that helps bring greater stability and security to the region.”

However, an official source at the Syrian Ministry of Foreign Affairs and Expatriates told SANA news agency that the Saudi aid to the "criminal" US-led coalition came in defiance of UN Security Council resolutions regarding the crisis in the Arab country.

He also accused the coalition of seeking "to fragmentize the region and impose Zionist hegemony on all its countries."

The source further described the Saudi contribution as "morally unacceptable," saying it is meant to prolong the Syria conflict, prevent the army from gaining ground against terrorists in the country's north and support the militants who threaten Syria’s unity and territorial integrity.

“Syria condemns these despicable policies of the Saudi authorities and demands them to stop these terrible and dangerous policies," he said. “Syria reiterates its call on all the coalition’s member states to withdraw from it without delay because it serves only terrorists and murderers and threatens security and peace in the region and the world.”

The US and its allies have been bombarding what they call Daesh positions inside Syria since September 2014 without any authorization from the Damascus government or a UN mandate.

The aerial assaults, however, have on many occasions resulted in civilian casualties and failed to fulfill their declared aim of countering terrorism.

The Pentagon says there are about 2,000 US troops in Syria. Washington is also supporting Kurdish militants operating in Syria's northern regions.

Similarly, Riyadh is a staunch supporter of anti-Damascus militants, who are inspired by Wahhabism, a Takfiri ideology dominating Saudi Arabia and freely preached by Saudi clerics.

In a relevant development, the UN Security Council’s Sanctions Monitoring Team warned in its latest report that Daesh had gained "breathing space" in parts of Syria held by US-backed forces.

The slow-down, it added, gave Daesh “breathing space to prepare for the next phase of its evolution into a global covert network."

The terror outfit also regained “access to some oil fields in northeastern” Syria and was able to "extract and sell some oil, and to mount attacks, including across the border into Iraq," according to the report.